I am stunned. I have been so disconnected with the Scientology-related issue over the years that I was completely unaware that Dave Bird passed away on Feb.10 of this year (ironically the same day as one of the biggest Anonymous protest against Scientology, which I am sure he would have loved to attend or at least to see).

I just got a hint of his demise today, reading this ARS post,then confirmed my suspicions through a Google search that led me to David Gerard's R.I.P page on Dave.

Even though Dave was a staunch (and some may say obsessed) opponents of mine, making posts after posts calling me "Barnie", "Barmpot the barmy Belgian", and comparing me to Barney the purple dinosaure because what I was saying made for him no more sense than what the child mascot was blatering, I cannot help feeling deeply sad learning of him having passed away.

I always remembered Dave upon seeing the Rubeus Hagrid character in Harry Potter's movie. A gentle giant with a big beard and a big heart. Of course, "gentle" would not exactly describe Dave's impetuous character, but one thing I know for sure, is that he did have a big heart, and his anger with me was prompted by his sincere activism and involvement against what he considered an evil cult, and me "defending" it.

All of a sudden, I do miss his harangues on ARS and his lyricism in his essay on me: "Hercule Barmpot: the Case of the Missing Marbles", in which he displayed a real talent for writing stories.

Rest in peace, Dave. Even though I do not think your arguments and tactics with me were right, I am certain that your heart-felt involvement in severals causes which you deeply and sincerely felt for will speak favorably for you up there.
1 comment: Links to this post

Jens Tingleff points out the Anonymous effect on the annual Lisa McPherson vigil in the U.K., that went from one protest with 5-10 protesters last year, to five protests across the country totaling about 200 protesters.

Even though this is only the tail end of the wave that started a bit more than a year ago and that is slowly dying out, you've got to admit that it did revive, at least for a while, the OG movement that was almost on the bring of extinction.
No comments: Links to this post

There is a conventional separation in the academic study of religion between the anti-cult movement and the counter-cult movement.

The anti-cult movement qualifies what they call "cult" through certain behavior, to the point they have been accused of "medicalizing" religious beliefs.

The counter-cult movement mostly sees as "cults" those new religious movement that depart from key religious beliefs of their own, namely, that JC died on the cross for our sins.

The anti-cult and counter-cult movement are natural allies against so-called cults, though at times things haven't been so rosy. This was for example the case when Conway and Siegelman started to adapt their "Snapping" paradigm to religious fundamentalists in their follow up book, entitled "Holy Terror: The Fundamentalist War on America's Freedoms in Religion, Politics, and Our Private Lives".

While the anti-cult movement can be a danger to society when the natural outcome of its "mind-control" theory is not tamed, it at least points to a concrete phenomenon best described, in my opinion, by the word "indoctrination".

The counter-cult movement, OTOH, offers no such rationale, other than the fact it "identifies" all the "false prophets" who dare to depart from the sacro-saint miracle of the Good News of JC's advent and who supposedly seek to deceive the elects away from salvation.

That this, by itself, is itself cultish should be obvious for reasonable onlookers, and I must say I fully agree with Monica Pignotti's recent blog post about it.

Not surprisingly, her position gets mis-characterized as "hating Christians", just as anti-cultists call "cult apologists" those who question their absolute certainties, just as the CoS refers as "SPs" those who dare challenge Scientology's grandiose proclaiments, just as fanatical right-wing activists accuse those objecting to a senseless war based on lies as "anti-patriotic".

Off Topic - Farewell Kiss to Bush 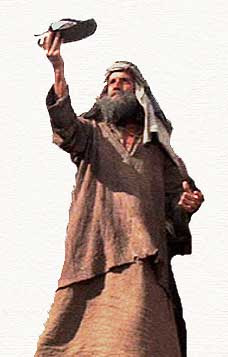 Rarely have I seen a shoe throwing more appropriate.

The guy lied to the world with lies as obvious as the nose in the middle of the face, killed hundreds of thousands iraqi and seriously injured many more, held people without charge for years, spied on his own citizens against the most elementary human rights, justified torture, pressured those who disagreed with him with cult-like us-vs-them arguments, spread his right-wing corrupted and retarded moral the world over, irremediably damaged the U.S. reputation across the globe, placed egoist corporate interests over planetary health, left the US with the biggest deficit recorded in history and gave a hand in shattering the world-wide economy into recession.

Thanks to that pair of size-10 shoes, it can now be said that the U.S. and the rest of the world are on solid footing again.

PS - Best blog to follow the unfolding saga of the shoe.

Some of my favorite quotes (culled from various media):

"Never in the history of humanity have so few shoes expressed the sincerest feelings of so many to one who was so deserving of that expression."

"Bush was not offended. He consulted his favorite Middle East experts, Bernard Lewis and Fouad Ajami, and they both assured him that throwing shoes at someone in the Arab world is a gesture of affection, as is calling someone a dog. " 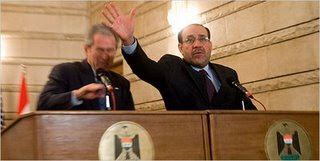 "Please, please, one shoe at a time"
"Recommended shoes for bush runs advice" (actually this one has nothing to do with the incident but it came up in Google search I found it remotedly appropriate...)

"Of course, attacking a country under false pretense is a pretty large insult in and of itself. "

"Bush gets the Boots"

"Had it been Rosa Klebb's shoes, it could have been more effective." (Where's Imelda Marcos when she's needed? )

"Ouch, that is the closest thing to justice that the Iraqis could ever see, but that would never even come close to repairing the massive damage that the jihadist (right-wing) US has done. "

"Even showing the sole of your shoe to someone is a major sign of contempt, let alone throwing it. "

"The shoe-thrower's words have been translated as, "Here's your farewell kiss, dog". I don't condone his actions but that's a catchy quotation that'll make it to the history books."

"The neocons nuts were telling us that Iraqis will throw flowers at them once the US illegaly invads Iraq by lying about WMDs and butchering a million Iraqi civilians. All bush got was two SHOES !!!!"

"Great, I can't take pepsi onto an airplane, but this guy is able to throw things at the President of the United States, SCARY!"

"yet I feel bad for Bush, he will go down in history as the worst president ever , his tenure will be remembered for how he tarnished the US image"

"I'm sure George's wife has thrown a few at him. He's had lots of practice."

""A Farewell Worthy of a War Criminal."

"Muntadar al-Zeidi talked to Bush in a way that matched the atrocities he committed and was heard by the entire world." 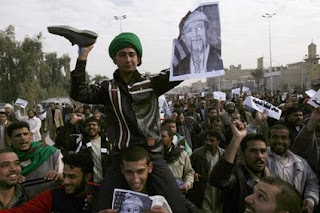 A man beats with a shoe a mock poster of US President George W. Bush with a "War criminal" written in Arabic during a protest in Najaf, Iraq, Monday, Dec. 15, 2008
"I don't think you can take one guy throwing shoes and say this represents a broad movement in Iraq." - Georges W. Bush of Bushism Supremo!!!

"I also wanted to speak to the appallingly flippant and insensitive remarks made by soon-to-be-ex-President Bush regarding this incident. [...] He dismisses this profound insult as the act of someone "just seeking attention", instead of the eloquent expression of one man's frustration and rage after seven long years of occupation, death and destruction."

"Bush can dodge flying shoes but not what history will remember him as: war criminal"

"I could not think of a better way for the majority of Iraqis ( represented by the journalist ) to express what they think of GWB ( venting their anger but doing no physical harm ). "

"The man is an instant legend."

"I am going to print up a picture of the soles of my shoes, and then put it on a postcard and send to the White House. [...] I hope all Americans will join me in doing this. Some folks near DC will be throwing shoes at the White House - some folks are mailing in a shoe to the White House (costs about $4.50 to do that)."

"While I don’t condone throwing anything at the president - or anyone else for that matter - as a means of expressing your displeasure, I do think this incident speaks volumes about how President Bush is perceived by the very people he “liberated.”

"THE most beautiful statement made this year BY ANY JOURNALIST. This Journalist is a master of his trade. He summed up the entire situation in a "one liner"

"This is a farewell kiss, you dog."

Related blog entries - R-Bushoe-
No comments: Links to this post