The Biggest Wake-Up Call Ever! 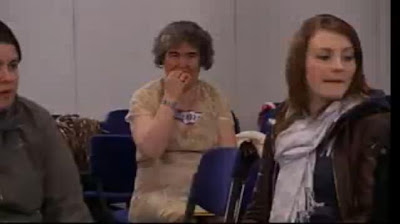 This sandwich-eating lady has made one of the biggest impression on the net ever. A typical anti-hero, old-fashioned provincial British (Scottish actually) lady, with a supremely bad-taste (hair) style and frumpy manners, who made a total fool of herself, twisting her hips during the preliminary interview for "Britains Got Talent" - all of a sudden wiped the whole audience down their knee in just three seconds after she opened her mouth to sing - so fabulous (absolutely stunning) her voice was!

As one of the judges said: "the biggest wake-up call ever" - don't judge the package on its cover!

Because of her incredible talent, that makes one wonder how she could remained hidden for the past years of her 47 years life, in spite of her best effort to pierce through, even her mannerism have become, of sort, a fashion!

Her second appearance was more polished already, but her singing still remained breathtaking, especially on the second part where she literally "took off" switching on a higher pitch! Susan Boyle was back, and stronger than ever! I'll try to squat some TV-owning friends' place to watch the final, like, I am sure, millions of people around the world!

WOW... now that is truly inspirational... and somewhere there really is a strong message in all this, both in her incredible voice and the package it comes up with!
No comments: Links to this post

GlossLip » Scientology Ditz, Jenna Elfman’s New Fall Show… A CBS Accident For Sure: "Just when things are looking up and NBC drops Scientologist Jason Lee’s show, “My Name is Earl,” (the dumbest show ever…right up there next to My Mother The Car) CBS says they are coming out with a new comedy this Fall called “Accidentally on Purpose”, and will star Jenna Elfman. Thanks CBS, thanks A LOT!"
No comments: Links to this post