It Will Take Time to Restore Chaos 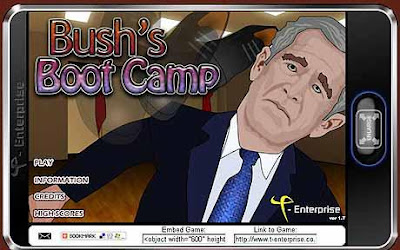 The shoe-throwing attack on US President George W. Shoe has been immortalized in an online video game by T-Enterprise: Bush's Boot Camp.

Bush loses "health points" every time he is hit with a shoe, and the game ends when his health meter reaches zero. 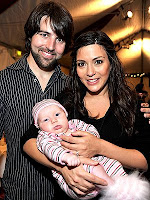 Taron Lexton (international videographer, youngest graduate of LA Film School, 9-times award winner), and Marisol Nichols, one of the most sought after actresses in Hollywood, must be Scientologists.

They got married at a Scientology Center and, last week, introduced 11-week-old daughter Rain India to the world while out at a Church of Scientology event.
No comments: 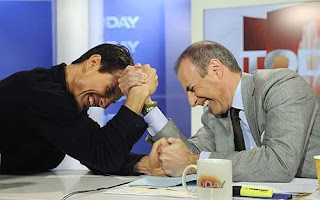 Tom Cruise re-did the Today show with Matt Lauer without being arrogant, a feat that makes him appears on the same headline as George W. Shoe on associatedcontent.com.

Tom Cruise admitted that the 2005 rant about Scientology on TODAY show interview with Matt Lauer came off as arrogant.

From watching the show Tom did seem very sincere in his apology he gave Matt Lauer.

Tom Cruise told PEOPLE magazine "I'm not a person who sits in judgment of people. That's just not who I am." It's nice to see Tom Cruise has learned a lesson. Tom is just like everyone else in a way. He got caught up in the moment and opened his mouth a little too much.

In 2004, the encounter with Matt Lauer in which Cruise angrily sounded off about the "pseudoscience" of psychiatry prompted 10,000 viewer emails to the network. The Telegraph reports him saying of the original interview:

"I went back and looked at it and it was interesting... you know, it's not what I had intended. Looking at myself, I thought, 'Man, that came across as arrogant.' It was one of those things where you go, 'Ok, I could have absolutely handled that better.' I didn't communicated it the way that I wanted to communicate it. That's not who I am, that's not the person I am, coming across that way."

Then more confirmation about the fact that the Valkyrie script was chosen on its intrinsic value alone, independently on how it may be received by the public.

"I read the script and I couldn't stop turning the pages. I used to play in the backyard with my friends Kill The Nazis and Kill The Germans, and suddenly to see there was this resistance and these people that had very high integrity and risked their own lives, and how early they resisted - that was fascinating to me. The film is a real edge-of-your-seat suspense thriller, but these events actually occurred."

The host later asked the actor about his decision not to talk about Scientology. Cruise said it's not that he won't talk about it, but "there's a time and place for it."

We already knew there were no more tension between Matt and Tom after Tom's appearance in the Friars Roast, but here we learn that there apparently wasn't any either immediately following the show:

Tension between Lauer and the Top Gunner was nonexistent. In fact, the morning-show king claimed "there was no animosity there" immediately following the fateful interview.

Lastly, we learn that Tom, still on his on his BlitzKrieg promoting Valkyrie, will be back on the Today Show Wednesday: