I had the worst possible experience with Paypal. I discourage anybody to use it. Apparently I was not the only one, as this thread on Slashdot show.

And here are two more links:

The Register has a rant about ATT blocking 4chan. Doesn't really say much, though.

World whines as AT&T muzzles 4chan, Google • The Register: "The most newsworthy message board on 4chan is /b/, which new journalists discover about every four months when they want to scare the shit out of people who own computers. Some /b/ users, who go by the name Anonymous, know a thing or two about internet security, and they entertain themselves by breaking into people’s private e-mail accounts, MySpace accounts, and other such painfully inconsequential things. Because of this, /b/ makes a decent slow-news-day scare piece: an army of anonymous hackers are out there, and they’re reading your e-mail. Oh shit. This just got real."

'The revolution will not be televised, but you can damn well believe it will be Twittered, and then promptly forgotten as it scrolls off the screen." 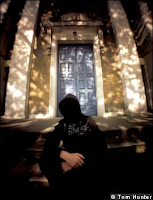 No time to actually read it but the Financial Times has an article about Anonymous with an enthraling title: "Dissenters Transfor the Art of Protest". It is being follow by the interview of an anon - "I do it for the LULZ" usual stuff...
1 comment: