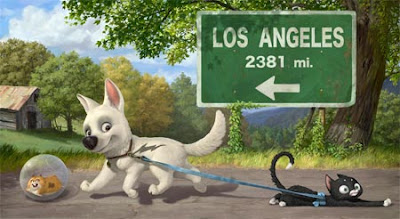 I remember seeing Grease as it came out. It was released after Saturday Night Fever even though it was actually realized before. The comment from a surprised spectator as Travolta started to sing the splendid "Summer Nights" was "and he can sing too"? Amazed that not only could he dance superbly be could sing as well.

Subsequently, not only the film but the songs and the clips became a big hit for Travolta and Olivia Newton-John. Remember "You're The One That I Want" - WOW! It gives me frills up to this day... and it came after another big hit from the film, Sandy.

Now Travolta sings again, and he shows that he has not lost anything of his talent. To be fair, I am not sure he can still dance like in his younger years, but he surely can still sing.

Check this video, in duet with Miley Cyrus, his co-star of his new movie Bolt.

And here is Travolta's Bolt interview.

Check out Anonymous new propaganda video that refers to Scientology beliefs as "garbage" and to Anonymous as the "Guardians of the Internet", no less...

"Since January, over 9000 Anonymous in over 140 cities worldwide have staged monthly protests"

This is false. While there may have been close to 9,000 anons in the Feb. and Mar. protests indeed, this number has now dwindled down to probably around 1,000. It is thus false and manipulative to make it sound as if the high numbers of Feb. and Mar. have persisted every month. Of course, Anonymous will claim that "over 9000" is just an Internet joke but this by itself is manipulative because it is presented in a serious context.

Anonymous claims their protests is working and that people should check their stats. Of course they do not refer to the disastrous stats of the crashing down numbers of protesters. Instead, they "steal" various events, basically claiming that they are the result of their protests, whereas most of the time there is no proof to that whatsoever and it is even unlikely. For example:
Follows a litany of allegation against the CoS claiming they are getting desperate. Among which the "accusing handicapped critic of assault" one about which I already blogged last June. They also accuse the CoS of "distributing lie-filled fake anonymous flyers" - ironic for an organization like Anonymous whose purpose is just that. Even the claim that the CoS is getting desperate is a projection, as Anonymous have turned their stance of martyrdom to a ridiculous level.

"After all, how could a bunch of teenagers who'd never heard of Scientology until a few months ago possibly not easily destroy an organisation which has been around for decades, with tens of thousands of dedicated grownup members and many millions of dollars in the bank? "Piece of cake", as Lafayette R. Hubbard would say. Sorry, I may have misplet 'cake'."

Anonymous hope to tags among the tens of millions new students joining Universities all over the world next month, but I doubt they will have anymore success than their failed black op 8-8-8 or big "over 9000 Anon March" that was supposed to be the epitony of all protests and was another resounding flop.

Even as of now, this propaganda video has been viewed only 204 times only. Compare that to the 2 millions of the initial video... Ok give it a bit of time, maybe they'll reach 2,000 - but even that I doubt. By no mean Anonymous is the mass movement it was for a couple of month at the beginning.

Read also the "more information" on that video, and the ludicrous, overblown and paranoid claims of "Crimes, Human Rights Violations and Deaths perpetrated by this sinister and dangerous cult".