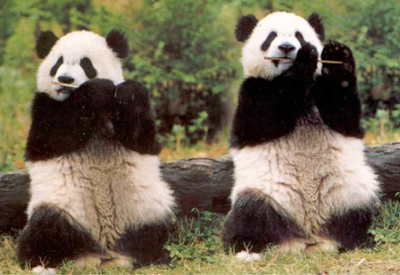 At this stage I am quite enthusiastic about this revolutionary product because it really is very light on PC resources and seems to constitute an excellent compromise. I think it is going to wipe out the competition, including Panda's own product. You can hardly make it more simple, powerful, and available.

I am not sure where Panda is going to make its money with this. They claim on their blog that the Suite still has its own advantage because "security suites contain many more functionalities not found in free AVs like Panda Cloud Antivirus, such as firewall, anti-spam, parental control, technical support, etc." - well, I also use a server rather than client based software for spam that works great, I use a separate and free firewall that does a good job as well, I don't need parental control, and it seems that the cloud hardly needs any support...

Anyway, as Google has shown, just deliver a high-quality product and you'll cash on it sooner or later. I am surprised that Google itself didn't come up with this, and I am still convinced they'll try hard to buy the whole Panda box altogether just for that one good.
No comments: 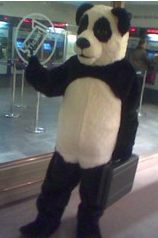 I recently changed my f-secure anti-virus for the free AVG program. I ended up throwing it out of the Windows as it dramatically slowed down my system (F-secure too, by the way).

My laptop is so much faster without anti-virus programs that I wonder if it is really worth the hassle having them at all.

I then had the idea to look for a non-resident program, something with which I can just scan whatever I decided to scan myself rather than what a resident resource-eating mother-in-law decides for me.

I found the perfect program for doing that in the person of ClamWin.

Anyway this becomes even more relevant after pandas come in the equation too.

Indeed, reading about clam win on the net, I soon bumped into the latest fad in terms of anti-virus fashion - Panda Cloud.

Now this is an anti-virus program that rather than relying on a never ending database updating, and consequent resources slowing down, system, is relying on "The Cloud", or "Collective Intelligence".

No more structural database. The knowledge about viruses is shared through a network of distributed resources and any new virus-like behavior emerging in California or Beijing, or anywhere in the connected world, is immediately shared by "The Cloud", and becomes common knowledge, with direct application on your PC, in an average of six minutes - and the more people use the program, the greater the protection of each PC gets!

Another advantage is that it is supposed to significantly reduce the demand on your system resources (and that's where I lend a very interested ear), since it does not need to intercept each file at different layers (entry vector, file system and execution) and scan them using various techniques (antivirus, heuristics, intrusion prevention, behavioral analysis, etc.) - with a very consequent workload reduction. Most of the processing is done up in the cloud.

Now this sounds really revolutionary, and why does it make me think of Anonymous? And Google? What is more, it's free... (but watch out, soon to be bought by the afore-mentionned Google, IMO)

I downloaded the beta version and so far it seems to do quite some marvel (reserving my judgment for later, though).

The one thing I don't like about is that it did not want to install itself while ClamWin was installed on my computer. I tried to offload ClamWin from memory, just to keep the scan on demand bit, but it also didn't agree to this.

Is that a transcategorial subliminal metaphysical sign of big changes to come? The "Collective Intelligence" win over the sclerosed traditional structures?

Another question is this: if panda's servers get hit with a virus, does that mean every person who uses panda software will be vulnerable? would this not be a way to spread a potential virus?

At the end, especially if The Cloud starts to make my system run at Panda's speed, the Clam may win after all...
No comments: