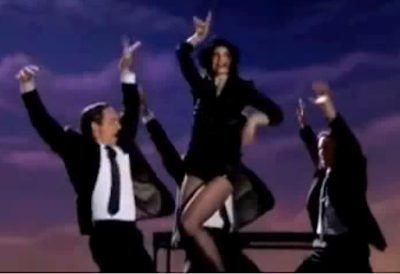 No very difficult dance moves but frankly not bad. I am more impressed with the singing, though.

Update: the video now made it to the "most viewed" category. In the meantime I learned that the singing in fact is the original Judy Garland to which she just lip sinc. I was wondering too as this was far better than the dancing itself and nobody seemed to notice ;-)

Update2: Now I am a little bit confused, because in yet another video that made it to the most viewed category, the presenter seems to say (not very clear) that it's actually Katie singing. If true, then it is going to become much bigger than it is, because I think that, while the dance is just so-so, the singing is outstanding.

update3: OK- I am now convinced that this is actually Katie singing. Just search the news and you'll many references to it. Besides, here is a 2007 video of her singing another song, and yes, it's the same voice. Check also this page that has Judy Garland's performance and Katie's back to back and you'll that the original voice is markedly different(though I do like the original choreography better but that's beside the point). I can really envision Katie completing the video that is shown at the start of the performance and putting it up on the market. Her voice really do match the one of Judy Garland! A rather amazing discovery (and so I'll put it in the Amazing category now).
No comments: Links to this post 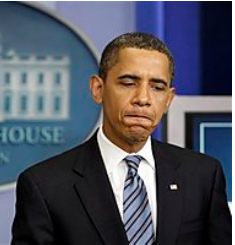 I too thought that Obama's words were ill-chosen as he commented on the Gates incident, and God knows I am an Obama fan. Really, he should not have commented at all, as it was only an incident and not worth making it a political issue at that level.

I also fail to see why race was an issue in the case. I have seen many videos of police behaving in a dis-proportioned way towards people of all races...

Really, it is not the place of a President to take side in such matters and give it national and international attention, as well as fomenting debates and conflict on such a sensible subject.

Obama did make a mistake. This is good in the way it reminds us that, he too, is just human. Maybe a real apology would have been better.
No comments: Links to this post

I removed the pre-moderation for comments. I almost never moderate out a comment anyway and in the past the spam has not been that bad either. Frankly speaking, the way I like it for myself and in general is the non-moderate way so I'll try to see how it works.
No comments: Links to this post

Diary of a Scientologist 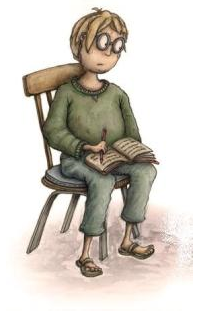 Diary Of A Scientologist

Lawrence Toomajan kindly sent me this link - a summary of his understanding on Scientology and of his experience within the group.

What follows is only my opinion after a first look, because I did not read all the site in details.

At first sight, it looks quite impressive. I like the presentation, very clear, illustrated, and running in sequence, making the whole site to read like a book. The content is detailed, yet accessible to a large public. I found the detailed summary of the upper levels particularly interesting, fascinating in fact. The site does make some effort to try to focus on facts and to present what Scientology is in a relatively objective manner.

For a while I thought that this may be a presentation I could recommend. Spot-reading certain key points, however, tempered my enthusiasm, as Lawrence's personal outlook taints the facts too much. It is still very interesting and easy to read, but, at the end, the presentation is just far more negative than, in my opinion, it deserves, so critical reading through the whole work is a necessity.

Let me take some of the key points that bothered me.

Again, this is a series of factual information, apart for the Erlich anecdotal evidence, and the fact that people are allowed to get 2 1/2 study and training time is properly reported.

However, the whole thing is written in such a way as to give people the impression the RPF is a prison (it says that much even) to which they are put in by force and from which they can only escape by force as well. Lawrence could say that he properly reported that "a Sea Org member accepts this fate instead of being expelled from Scientology", pointing to the fact that time in the RPF is not against the person's will, but this statement is drowned in the whole that gives an impression that contradicts it, including the highly suspicious statement of Erlich that he was "locked in a cage next to a woman that was chained to a wall for several days". Such a statement, correctly reported as the testimony of Erlich rather than as a fact, is not there by chance and only serves to give people a dreadful impression of the RPF that, IMO, is way off-base.

Now obviously the RPF is not the Club Med. I am not saying that it is a pleasant place to be and that, in such a context, abuses may not or did not occur, but it just does not correspond to the impression given in these three paragraphs. I can only encourage people to compare these with the pages I webbed at http://bernie.cncfamily.com/sc/rpf.htm, to get a more fair idea. You can't, of course, go into much details in just three paragraphs, but I personally think that such a sensible point should not be treated in such a unilateral way and with such a negative slant. As for me, it rang an alarm bell, that lead me to take a more critical look on the whole site-book. Surely, the negative aspects of the RPF could be emphasised while also taking care not to over-do it.

I don't think, however, that Lawrence could restrain his overall negative view of Scientology through his writing, even though he may try to focus on facts and be relatively objective, because that's just how he personally seems to genuinely feel. This transpires in so many aspects, too numerous to pick, and sometimes also does distort facts.

For example, Lawrence writes that Lisa McPherson "died of a stroke brought on by dehydration". This is very far from having been established. Quite on the contrary, arguments and facts prepared by the CoS for the then upcoming criminal case, showed that Lisa died as a result of a blood clot dating back to the road accident she was victim. This lead the prosecutor to drop the case, feeling that their argument of her having died from dehydration just could not be sustained in court. See my Lisa McPherson page. The least you could say is that it is a controversial matter and certainly not a clear-cut case. Lawrence, however, present it as such, ignoring all the elements that makes such a straight-out statement doubtful, to say the least.

I still plan to read some day Lawrence's page in details, because it does look interesting, but, although I personally know enough about various aspects of the Scientology controversy to read through the lines and part facts from fictions, I am afraid it is not the case for the lay person, and I urge the reader the be very cautious when it comes to aspects that may seem too far-fetched to be true. It usually is. Far-fetched, that is.

The Between Lives Area

I read with some interest these two paragraphs, because I often sought to make for myself an idea of what is the exact belief of Scientology on this question.

Again, while an interesting read, I just wonder where did Lawrence get his information. It would be interesting to get a link to the various references used, but this is, at this stage at least, impossible, simply because there are no such links. I do recognize bits and pieces of what I read myself (implant stations, order to forget, etc) but never read anything that depicts it in such a clear-cut way.

Again, based on what I read on the site about subjects where at least I do have some knowledge, I suspect that such a summary may be an over-simplified and somewhat biased depiction of Scientology beliefs on that matter. It may be correct, though, but certainly we would need the exact references to check it out.

Now that Lawrence laid out his own basic belief/understanding of Scientology, he could spend time injecting links and references, and possibly review some of his more drastic statements.

An easy and potentially interesting read nevertheless.
5 comments: Links to this post