If you are a Scientologist, then it seems that your privacy right is lifted and that you would be fair game for a group ironically calling itself "Anonymous" to gather your photo and name on the page above.

Anonymous also displays its "Docs or STFU" myth in unwarranted and false assertions in comments such as: "Note: Jett Travolta would be alive today, if he had been 'drugged' (medicated)."

It also displays its tremendous power for researched (Docs or STFU) in its logo:
Once more, Anonymous just demonstrates it is nothing to be taken seriously, and that it exceeds in many ways the ugliness it accuses Scientology of.

One year ago, on Feb. 10, 2008, Anonymous members appeared out of nowhere to protest Scientology around the world. The numbers were spectacular. In March, following the prediction of Anonymous that the protests will occur in increasing numbers every month, the amount of protesters were even greater, estimated to around 9,000.

After March, though, and contrary to the Anonymous announcement above, the numbers have been decreasing every month. Nowadays 1,000 would already be a lot.

In this respect, it was interesting to see what would be the numbers for the one year anniversary of Anonymous. For sure, at least some of those who did not protest in subsequent months would come out for this special occasion.

It is not possible to easily follow these numbers anymore. After their stats crashed, Anonymous stopped posting them systematically. Today, to know what the numbers are, one would have the burden of wading through all the posts in the WhyWeBWAA forum, trying to extirpate them from hundreds of infantilic comments, and even so one may not find them reported. I am therefore only taking the reports posted in ARS as a basis for comparison. To date, there are only three: 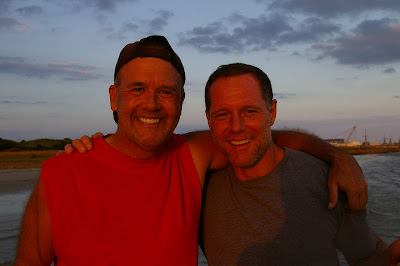 Marty Rathbun is now offering alternative services outside the CoS - which is a bit ironic knowing that as Inspector General Ethics for RTC he was responsible for getting rid of all the squirrel groups...

The undated picture he uses on his web page features him together with Jason Beghe. Some estimate that picture from 2005, but it may well be a recent one as Jason Beghe was the one to announce the departure of Rathbun from the CoS in Jun. 3, 2008:

I spoke with several VERY RELIABLE sources this weekend who say they are in contact with Marty Rathbun. He is very much alive and very happy! Apparently, he finally left for good due to his disgust with DM’s treatment of staff.

Marty is a great guy, a smart guy and a tough guy. Even if he isn’t nessasarily on ‘our team’, we are certainly fortunate that he is not on ‘their team’. I applaud his courage and integrity for leaving and wish him all the best with the rest of what I hope is a very long, rewarding life…..

You can also check the ARS thread about it (in which a critic demonstrates the "we-do-not-hate-Scientologists" moto with the remark: "Maybe the world will get lucky and Rathbun will choke on a shrimp and die"), the OCMB thread and the WhyWeBWAAA thread.

I was a member of the Sea Organization for twenty-seven years. I learned how to audit and troubleshoot virtually any technical problem at every level of Scientology. For years prior to leaving the Church I was regularly called upon by its top-ranking members to resolve its toughest and, in many instances, most high profile cases.

Having dug myself out of the dark pit where many who leave the Church land, I began lending a hand to others similarly situated.

A lot of folks seem to be suffering from the inculcated idea that once they depart or cease to slavishly follow every arbitrary dictate they automatically forfeit any spiritual gains they may have attained along the road. Natively conscientious as most beings are, such an evaluation can begin a pernicious dwindlng spiral of self-invalidation and unhappiness.

I understand this phenomenon and the internal dichotomies extant within the organization that bring it about. In the process of reversing the decline in myself and in others certain lessons were learned that might be of some assistance to those who have experienced the same.

I offer a simple program of rehabilitation of previously recognized abilities and education on universal truths and principles of spiritual growth. I do not offer a substitute for Scientology nor am in competition with the Church. I am only offering to share all the skills I have learned – from a wide variety of sources - to help those in need who once formally participated in Scientology but who now hold no hope nor intention of ever seeking help from the Church.

My services are peformed in a relaxing, bayside environment with unlimited space and fresh South Texas air. Reasonably priced accommodations – which include plenty of Southern hospitality – are conveniently located within a short, pleasant walking distance.

My services cost whatever you think they are worth, within your means, after completion. I ask that you pay me one-half of whatever you determine that value to be when you head back home. Then, if after a month you believe your original estimation was correct you can send me the other half, or not. It is entirely up to you.

A Dianetic racing car team has been active in Switzerland over the last couple of years. You can check out their detailed web site (in French) here: Dianetics Racing - tout sur les courses de voiture.

It seems now that one Kenton Gray is seeking to replicate the experience at the NASCAR level. I don't know if that team has a web site yet.

Kenton Gray, a California race-car driver who has said Dianetics helped his life and driving performance, will head up the Dianetics team.

"It's markedly improved my focus and my consistency," said Gray in a statement. "Through Dianetics I've handled stress and increased my performance and ability to compete -- both on the track and in life."

Gray finished first in five regional races over the last year and ranked in the Top 5 in dozens of other races.

The team is hoping to spread messages of Scientology through weekly tours on the track, although it will compete on the local circuit, not NASCAR's premiere national events.

NASCAR did not address the idea that it now has a controversial new participant in its very successful money machine.

"We're not going to comment on the sponsors that the local weekly tracks secure," Kerry Tharp of NASCAR.