Quote of the Day - John and Jett

"eg, do you have evidence that co$ and the travoltas deliberately killed jett? have you turned it over to the police yet?"

Elle (lipshitz) is questioning one Kennethnoisewater's assertions, the ludicrousness of which can be seen at:

Check also the rest of the thread, and see how quickly simply questioning and asking for dox turn into the usual "helping OSA" accusations, to which Elle had this to say:

"i told no one to shut up, tho i do understand that accusation is the traditional ars response tocontrary opinions. why am i 'helping them out' (doing osa's work??) by criticizing critics for slinging assumptions and innuendo like hog slop? when did it become a crime to ask questions or expect accurate info from critics? when did facts become so scary?"

Report from the WhyWeBWAAA forum. Only 9 anons present (30 Scientologists). Remember, Amsterdam was the place where a peak of 112 anons protested.

Apparently, the police were chasing anons indeed as soon as they put on their mask or pull off their sign, like it seems may have happened in Germany and the UK. They let them cool off in jail but didn't bother asking for their ID

Now the "Epic epic big win" for anons is a mask signed by Cruise! Pretty soon they'll start joining rank with Scientologists too...

One anon thinks that shouting to Cruise "Miscavige is your SP" is a way to get his mask signed.

Amsterdam Valkyrie opening night - Why We Protest | Activism Forum
No comments: Links to this post

As I wrote in my German and UK review of Cruise's premiere, Anonymous was all but absent from the press, except when Cruise signed a mask.

One of my regular commentators commented: "Well, they had two TV appearances in german TV. One in the news and one in a 45 min. documentary about Anonymous and Scientology."

Well, OK. We'll no doubt hear about that more from critics then.

Today, I read two references in the UK news outlets:

Cruise Wont Buy Into Jonathan Ross Scandal (from Evening Times): "Among the crowd were a small group of anti-Scientology protesters - Cruise is a Scientologist - wearing masks and waving banners."

So at least something...

You would expect that London, being the place that, by far, held the biggest number of Anonymous protesters, would come up with a sizable bunch for the premiere, one of their few remaining opportunities to get their masked face in the press.

So what happened? Did just a handful really come, or where there removed by the police?

The next press entry leaves me to think that something like that may have happened:

The 9 0'Clock News – Thu 22 Jan: "Famed for his mammoth meet and greet walkabouts on the red carpet, Tom didn't disappoint last night and the only hiccup was when one protestor had to be forcibly removed after holding up a 'Scientology is Evil' poster in reference to Tom's religious beliefs."
No comments: Links to this post

Ross Having to Read the Daily Mail as Punishment 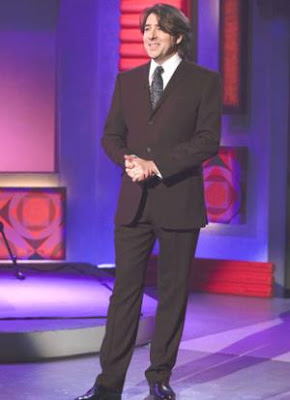 The Independent has a much better article than the mailonline (now what do you expect...) about Ross' avant-premiere return.

I just love that line of Ross from the article:

'I have realised the error of my ways. For next three weeks I will sit in uncomfy chair and read the Daily Mail. That's punishment enough.'

'Where were we?' The return of Jonathan Ross - TV & Radio, Media - The Independent: "Prancing on to the set of his chat show to the tune of Take That's "Never Forget", Jonathan Ross began his long-awaited public comeback yesterday with four words: "So where were we?" [...] Cruise made no reference to his host's misdemeanours, while Ross observed the strict no-questions-asked policy regarding Cruise's Scientology beliefs. [...] Since his suspension, Ross has tried to build bridges with his fans by chatting to them on social networking websites. Writing under the pseudonym 'Wossy', he has accumulated 14,000 followers on one site alone, discussing with them everything from his family holiday in Florida to his dismay at the demise of Woolworths and his abiding hatred of tabloid journalists."

I don't quite understand that news but somehow it got Oscar nomination mixed with "A Very Merry Unauthorized Children's Scientology Pageant".

Chicago theater vet Michael Shannon earns Oscar nom | Features | Theater | Chicago | Decider: "Sure, Steppenwolf Theatre can tout its throngs of famous actors, with Gary Sinise, John Malkovich, and Joan Allen getting all those past Oscar nominations. But now add the tiny A Red Orchid Theatre to the list of stages that can boast honored alumni. Longtime off-Loop theater actor Michael Shannon has received a Best Supporting Actor Oscar nomination for his work in Sam Mendes' Revolutionary Road. Since 1993, Shannon has been an ensemble member of Old Town's size-challenged A Red Orchid Theatre, which most recently produced A Very Merry Unauthorized Children's Scientology Pageant and is probably best known for being the home of the world premiere of Tracy Letts' Bug in 2001. Shannon starred in that production, went with the play to New York and starred in William Friedkin's film version in 2006."
No comments: Links to this post 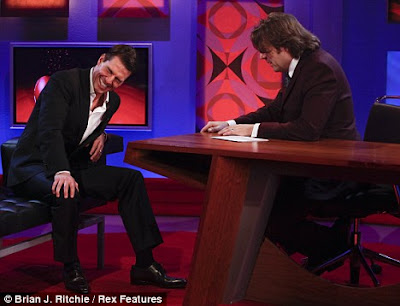 "TOM CRUISE has brushed off speculation over his appearance on disgraced Jonathan Ross's comeback TV show.

The actor, speaking at the UK premiere of his new film Valkyrie, said he had heard about the prank phone calls scandal involving Ross but thought it was time to move on from it.

Cruise said he had been briefed about the affair but added: 'I know a little bit about it and have done interviews with Jonathan Ross before, so I'm looking forward to seeing him.'"

Gossip tabloid rag mailonline has an avant-premiere article of the show in which it claims a lot of swearing was made by Ross. We'll have to watch the end result to make an idea for ourselves.

The rag typically slips into gossips towards the end, and even adds "the Mission Impossible star is notoriously unwilling to discus his religion" - see? That's a double bind and shows that you can never win with these tabloids. Either you speak about the religion and are mocked or don't and this in turn leads to more accusations and innuendos.
No comments: Links to this post

Church Donation Supports City Emergency Response | Pasadena News Now: "In response to President Barack Obama’s “Day of Service” challenge for Martin Luther King Day, members from the Church of Scientology of Pasadena honored the Pasadena Fire Department’s operations captain and community liaison Danny Serno with a check for over $1,100. [...] Scientology volunteer ministers, the church’s boys scout troop stationed at Sunland/Tujunga and the Women’s Auxiliary of the Church raised the money by cooking an “all you can eat pancake and egg breakfast”."
No comments: Links to this post

We also learn (at least I did) that Bryan Singer is a Jew himself - so much for Friedman ranting about Valkyrie being a Nazi apologia.

‘‘There were things I actually left out because I knew people would think we were making them up,'' he says.

‘‘For example, when von Stauffenberg was injured, he refused any morphine and he did that very specifically because he didn't want to be addicted -- he needed to be focused, he needed to re-learn how to write. He needed to get back to work.

‘‘But imagine Tom Cruise saying ‘No morphine!' People would think it's a contrivance.'' [...]

Singer didn't pay the bad press and negative rumours too much attention.

‘‘You have to realise that I went through a period of extraordinary scepticism when I made the first X-Men movie. There hadn't been a comic-book film in a long time. I was not a comic-book fan . . .

‘‘So this was not unusual territory for me. Here was just a much more magnified version, because everything associated with Tom Cruise tends to get magnified.'' [...]

‘‘Then they see him in a movie and they say ‘Oh yeah, I forgot, I like Tom Cruise'.

Singer also reckons the actor was a surprisingly good fit for the role.

‘‘Von Stauffenberg was very much a bright light among his fellow officers. There was a kind of energised, unique quality about him that Tom has as a person and an actor. And the physical resemblance is extraordinary.''

You know, I literally love the Dutch people, and Amsterdam is my favorite town in Europe. Dutch are notoriously open-minded, but they are also a cheerful bunch, really joyful and very straight (in character, huh...!). I also love to work with them. They are disciplined and competent. And I love the Dutch accent too, particularly that of Amsterdam (as a Belgian I understand Dutch).

OK - that's a lot of generalities and I am sure there are also assholes, but frankly, the vast majority of Dutch I encountered have been most entertaining and pleasant.

And now, Cruise is in Amsterdam for Valkyrie 's premiere, and there are two Dutch actresses in the film, one of whom (Carice) I blogged about already.

"Hollywood Actor Tom Cruise is in Amsterdam to attend the Dutch premiere of his latest film Valkyrie on Thursday evening. There's great interest in the movie in the Netherlands, as it features two Dutch actresses, Carice van Houten and Halina Reijn. [...]

'Everyone was unbelievably kind and inspiring."

'the next day was completely normal, and Tom Cruise is a great compliments machine. Every day he said 'Carice, you're a great actress'.' [...]

'When I read the script, it was entertaining and informative to know what the challenges were and what it was like to be in the environment. I've never heard of this story before... It turned out to be an incredible adventure, just to be there and shoot at these locations where Stauffenberg was. It was a very powerful experience and hopefully it will communicate with the audience. It has certainly influenced my life, just knowing that there were people who tried to stop him [Hitler]'"
No comments: Links to this post