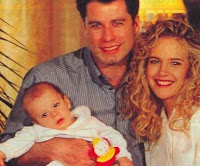 The tragic death of Jett Travolta will no doubt see a resurgence of various myths.
Related blog entries:

It is inevitable that debate would be open on Scientology influence in Travolta's decision throughout this tragedy, but can't critics at least wait a bit rather than jump in the middle of mourning comments?

At least some of them had the minimum decency to first offer their sympathy before launching in their tirade, but others just jumped in with heartless, insensitive, and cruel comments right in the middle of people offering their sympathy for this terrible tragedy.

Here is a couple of examples, among several others:

Posted by: Maryanne | January 02, 2009 at 03:45 PM
My sympathy only goes so far for parents that belong to a religious cult that preached that brain disorders and mental health care is a hoax.

And of course Anonymous, who saw fit to post its "we do not forget" and other unsavory statements right at the top of the mourning comments.

Needless to say, normal human beings do not take such a display of sickening fanaticism and hatred lightly, and it's hardly going to improve the image of Anonymous and other so-called critic:

tbailey said at 5:05pm Jan 02, 2009
It's a sad day when any child dies, even sadder when people like commonsense spew their hatred and stupidity where it is not welcome. My condolences to Jett's' family and to commonsense's family, your parents must truly be proud of such a fine person.

Zman said at 5:05pm Jan 02, 2009
Where is the heart and compassion for the loss of a human being, a child at that, with an illlness at that. because of someones beliefs we have become loss in world of religions, forgeting that when someone passes, it tuly is a loss to their loved ones, and much needed compassion needs to be promoted. I am so sorry John for your loss of such a young soul. I remember when Jett was born and the proud pappa you were. God bless you and your family. Screw the insesitive indivuiduals, where only Karma will prevail in the end.

Why Was He Called Jett? 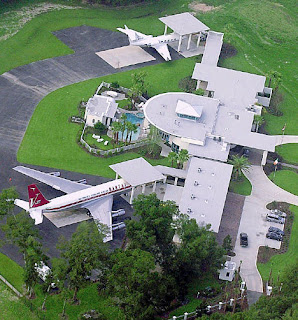 John Travolta has a passion for airplanes. His 6,400 square foot mansion is designed to resemble an airport terminal. The house is at the end of a 1.4 mile runway from which Travolta can take off in his fleet of private jets.

Such is his enthusiasm for aviation that he persuaded his wife to name their son Jett.

Of course, he also called one of his five aircrafts "Jett Clipper Ella", and his Florida estate "Jett-Bleu", in honour of the 16-year-old lad and his daughter Ella Bleu, eight.

Just two years ago John survived an air drama aboard his personal plane when he was forced to make an emergency landing on a flight from Germany to New York. His Boeing 707 (photo above) suffered engine problems and he had to divert to Ireland's Shannon Airport. Cool Travolta grounded his 34-seater and continued his flight home on a commercial airline.
No comments: Links to this post 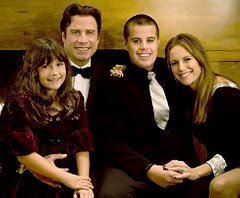 John Travolta's 16-year-old son, Jett, was found unconscious in the bathtub of the family's vacation home in the Bahamas on Friday Jan. 2 at 10 am.

He was rushed to Freeport's Rand Memorial Hospital on Grand Bahama Island but was declared dead on arrival.

The exact cause of death is unknown at this stage. Apparently he fell and fatally hit his head.

The teenager, however, had a history of seizures which the Travolta family attributed to the sequel of the Kawasaki disease (click here to hear Travolta speak about his son's rare syndromes).

Kawasaki disease is a condition that causes inflammation in the walls of small- and medium-sized arteries throughout the body, including the coronary arteries. It mostly affects children from ages 2 to 5. Identified by a Japanese doctor, Tomisaku Kawasaki in 1967, Kawasaki disease can cause serious complications of the heart and the blood vessels that supply the heart.

However, rumors that Jett really suffered from autism rather than the Kawasaki decease have long swirled in Hollywood. Travolta and wife Kelly Preston have never publicly admitted that Jett had ever been diagnosed with the condition.

Anti-Scientologists and Anonymous have been quick to jump on the news, since Travolta and Preston are both prominent member of the Church of Scientology, and within minutes of the death announcement were already busy filling news comments with insensitive accusations and bigoted myths, while the family only started mourning their own and was at the height of an unimaginable pain.

Police said they are planning an autopsy on Monday to determine the cause of death. After the autopsy the body will be buried or cremated in Ocala, Florida, close to where the family lives. Dr. Mark Smith, the Travolta family doctor, plans to give a statement after the autopsy.

The family arrived in the Bahamas on a private plane Tuesday Dec. 30 and had been vacationing at their home in the Old Bahama Bay resort community.

"The Travolta family has become like family to us at Old Bahama Bay and we extend our deepest sympathies to them," said Robert Gidel, president of Ginn Resorts, the property's owner.

The family is of course devastated. John had in the past emphatically expressed how much his son meant to him.

Usmagazine.com quoted John Travolta as speaking affectionately about his son during an interview with the Australian media several years ago. "He's my first, and he's my heart. And he's a very special boy," John Travolta said. "He's Daddy's boy."

In 1994 the actor told People how much he loved fatherhood. "I can't imagine what life would be like without Jett," he said.

Our deepest condolences go to John and his family. Losing a child is parents' worst fear, something for which there can be no words.