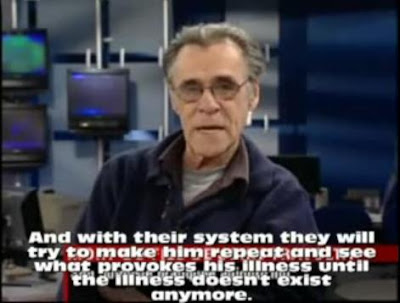 If you ever want to see why the testimony of some Scientology ex-members can be totally biased and wrong, then you ought to watch this television interview of Jean Paul Dubreuil made in the wake of the Jett Travolta tragedy.

The interview was sub-titled by the Anonymous Credulous type, who, as witnessed by the comments, find it a wonderful source of information.

The problem with this is that autism is NOT a mental illness. His claim therefore that Scientology does not recognize autism is pure and unadulterated crap. Alas, one that has been repeated ad infinitum by the press.

He also says that he is really surprised that Travolta did not seek medical treatment for his son because he really can afford to find the best medical advisers there is.

How the hell does he "know" that they did not seek medical advises and medical treatment? Of course, he doesn't, but he heard that assertion in his closed group of "critics" and just repeat and present it as if it were a fact. Quite on the contrary we know now that the family did seek out and use medical doctors, something that any Scientologist with a modicum of common sense and knowledge about Scientology knew already because they would know that medical treatment is not forbidden in Scientology.

He then brings up his brother who died because, he says, he did not receive medical treatment, waiting to be cured by Scientology instead.

We don't know the details of this story but we do know for certain that it is definitely against Scientology policy and Scientology tech to sell people courses or auditing with the claims that they will get cured of this or that medical ailment. And of course we also know that Scientology does not prevent people from pursuing medical cures, quite on the contrary.

If that wasn't bad enough, we get treated with a description of auditing that supposedly consists of "trying to make the PC repeat and see what provokes his illness until the illness does not exist anymore".

If that's the guy understanding of what auditing is, then I am not surprised he wrote a whole freaking book to complain about all the terrible things Scientology supposedly did to him and his brother, because he demonstrate here that he doesn't understand squat about Scientology!

Auditing really consists of following the chain of previous traumatic incidents until the source that lays in the past blows, at which point the person is freed from the mental effect of that particular chain of events (and not cured from illness, even though this may be a consequence).

Dubreuil, however, sounds as if he believes that auditing is just a sort of mantra that is constantly being repeated until the subject is hypnotized to think he is not sick anymore!

Asked what doctors think of Scientology treatments (as he would know), he bluntly proclaims that doctors proscribe it! No, he does not say doctors "don't recommentd" it, as is written in the sub-title, he really uses the term proscrivent". That's French for "proscribe". It seems that the Anonymous Credulous who made the translation tried to ease off and soften up some of the utter crap that was coming out from what is supposed to be the guy's mouth.

Dubreuil also claims that he tried to audit someone to cure him from autism, then complains that it did not work!

The reason it did not work is simply because auditing people to try and cure them from medical ailment is a no no, and because autism is not something you can cure, whether with Scientology or medicine or psychiatry or Voodoo dances.

From all this, ensues shocked expressions of horror at the thought of Scientologists taking on to themselves to audit their children to cure them from autism or other medical ailments rather than follow medical advises. It never occurs to that journalist that the assumptions and information at the basis of these claims are just totally wrong. No. That "ex-member" is taken as an authority on the subject, by the sole fact of him being an ex-member and his accusations going in the direction of the general mob understanding of Scientology.

As Lisa Marie Presley wrote in her Facebook today:

“Just like anyone else, If one is sick, they go to the doctor, If a medication will make it better then they take it. If they don't then they are an idiot and you can't blame their religion.”

That guy Dubreuil falls perfectly under the definition, trying to blame Scientology for what is mostly his misunderstanding and misapplications.

But hey, he wrote a whole *book* with his "criticism", and, you know what? He goes to *schools* to preach his anti-Scientology views. And of course he is ailed by so-called "critics" of Scientology...

Jean-Paul Dubreuil is the example type of the perfect apostate. Having an axe to grind but ignorant about the very subject he is supposedly expert about, as well as other subject which he pretends to know about, such as autism and what doctors say, and in which he has of course not competence whatsoever - and yet preaching the world over that Scientology is BAD BAD BAD.
7 comments: Links to this post

After their July attack on Google, falsely promoting "Scientology is a Cult" and a Swastika on top of Google Trend, 4chan is in the news again, this time pushing up the trend the ✈ ▌ ▌symbols, graphic representation of the terror attacks on the World Trade Center on Sept. 11, 2001.

A quick scan of 4chan shows all threads promoting the 9/11 symbol raid have since been deleted, but it is nevertheless universally recognized as another typical 4chan prank.

The punks over at 4chan are also blamed on the same day for the hacking of the MacRumours site's immensely popular live-blog of Apple's MacWorld, bombarding its feed with various vulgarities and the proclamation that Apple head "STEVE JOBS HAS DIED."

In spite of massive objections from Scientology critics, including a full blown letter from Graham Berry, Riverside County supervisors Tuesday unanimously approved an ordinance that restricts picketing outside homes and a Church of Scientology base near Hemet.

The funny thing in this is that it is worded in such a way as to effectively prevent picketing at all.

Indeed, the protesters are supposed to remain at least 50 feet from the property line of any residence they are targeting in unincorporated Riverside County. This would in concrete term exclude them from the whole compound.

The ordinance makes an exception to permit protesters on a sidewalk across the street from the property.

In the case of Gold, the street in question may in fact be a large and busy highway, mostly made of intraversible terrain, making any protest totally ineffective, not to say dangerous.

But that's not all!

The church's base in Gilman Hot Springs abuts both sides of Gilman Springs Road!

So this leaves the protesters no place to go!

Wait! It even gets funnier.

County Counsel Pamela Walls assured protesters would have many options, but when asked to indicate them on a map, she said that she was not familiar with the specific property!

I think this is hilarious!

There is hope for critics, however. Indeed, Walls said "We are going to make sure they have the ability to protest and do so visibly".

So, this is what I would do if I was one of these Anonymous clowns. I would go in full picket gear to Walls' office, or whoever is in charge, and ask where I could protest and do so visibly. If she can't tell, then I would picket the Chief Supervisor office instead. Providing he does not live there, of course!

Update Jan 8: What the article above does not say, is that a public hearing must be held before the measure can be formally added to the books. The hearing would be placed on the board's calendar in the next two or three weeks. Guess we will be hearing of that story more then...

There is no misspelling in the title. Shortly after meeting Dianetic/Scientology, John Travolta also met with Diane Hyland.

Douglas Thompson, John Travolta's biographer, reports in an excellent article the impact this had on John, as well as the dramatic outcome, and the link it has with the tragedy through which he and his family are going through presently.

One of the irony of this story, something that is not highlighted in the article, is that John met Diana through his part in the TV movie, "The Boy In The Plastic Bubble" about a boy born with a deficient immune system.

In 1976, when John was a 22-year-old teen idol receiving 10,000 fan-letters a week, he was offered a part in the TV movie, "The Boy In The Plastic Bubble" about a boy born with a deficient immune system. The "Peyton Place" star, Diana Hyland played his on-screen mother and would become one of the greatest influences in John's life.

Travolta's perpetual charm kicked in from day one of "Bubble." But he found something happening to him. His attitude to women had been, to put it kindly, cavalier. He hid deeper feelings for them out of fear of a fun relationship turning permanent.

But with Diana it was different. "On our first meeting I was just incredibly attracted to this woman," he told me. "She'd gone through a rough marriage (divorcing actor Joe Goodson and keeping their three-year-old son, Zachary), a lot of career ups and downs, and had come out at peace with herself. [...]

The couple began an intense affair but in the Christmas of that year, tragedy struck. Diana thought she had caught flu and was plagued by back trouble, aches and pains throughout the Christmas of 1976. By the time she saw her doctor in the New Year, she was told that cancer had spread throughout her body. There was nothing anyone could do.

His sister Ellen once explained to me: "He was devastated not only by the loss but because there was nothing he could do. [...]

He was never the same. Something like that changes you forever."

He turned down the Richard Gere role in "American Gigolo" and found himself more and more drawn to the Scientology movement which the actress Joan Prather had converted him to the previous year.