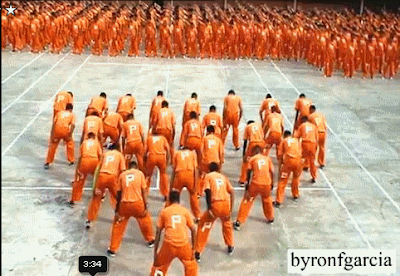 I've seen loads and loads of Jackson-related tributes and what not on YT, but this one is mind-blowing.

I actually saw a bit of it already on the Filipino news, as these are inmates of a Cebu prison, but they have not shown the entire video by far, available now on YT.

It almost seems impossible that they could put such a complex arrangement in such a short notice - even though they say it took them 10 hours to create. And where did all these world-flags came from? And how come there seems to be a show setup with a public? I think it probably is a show they were preparing for a long time already, and the timing just makes it as relevant as it can ever be.

By all mean, it is just f-a-b-u-l-o-u-s, and I must admit I had trouble seeing the whole thing as my eyes were blurred with tears.

Update: Apparently these inmates were already famous through a video featuring a choreography of thriller. I saw that video now, and in my opinion, the tribute video is much much much much better than this thriller video. The Thriller video does not have any kind of complex mass movements to it. It is just a bunch of people moving more or less in synchronicity and if they weren't inmates it would be nothing special, on the limit of bad taste even at the end. The tribute video is just a totally completely different kind of show - of total genius, inspiration and spontaneity.

Update 2: What do you know - it turns out that this goes MUCH further than it looks. Just watch this amazing footage. It explains it all, and shows why that clip which I am sure will become even more viral than Thriller is only the beginning of something MUCH bigger to come...
No comments: Links to this post