Well, I am not sure what to make of it, but the idea certainly has potential, and the story moving:

Thanks to Graham for pointing it.
No comments: Links to this post

In this blog, a Scientologist, after having watched the film "Valkyrie", is furious against the German government for its discrimination towards Scientologists, as compared to Cruise now defending the "Good German" image.

This is one of the things I find remarkable in Cruise's choice.

As I blogged already, I declared his choice a winner already before the release of the film, on the sole ground that he did it out of the depth of his soul, no matter the concrete outcome. That these outcomes are now turning out to be good, very good even, there was no way of knowing that at the time, so this remains admirable.

The second thing I find admirable in Cruise's choice, is that he pushed through with this idea in spite of all the wrong (and I hope in time they really will be looked upon as serious wrong) Germany does in its discrimination towards Scientologists. That Cruise could put all this aside and push through with an idea in which he believed in, in spite of all that wrong, is truly commendable.

I invite Scientologists to share the same spirit. Obviously, discrimination is ugly, very ugly even, and when it translates in actual mass killing, abominable. But the two issues really are separate. The noble way is the Cruise way, at least in this case, and eventually it may do more to change pre-conceived and prejudiced idea than any angry and accusatory reaction. Or not. This just does not change the beauty of the act by itself.
No comments: Links to this post

Castaneda reported at that time that he has sentenced 11 individuals to the Second Chance Center since late last year. He said seven have completed the program and five were currently in the residential drug rehab program that takes six months to complete.

Seven and five would of course make 12, not 11, but let's assume this is just a typo somewhere.

The reason I find it worth blogging about it separately is because it reminds me of what I once webbed about Kathy Waddell's comment on a similar joke:

There are three types of people in the world... Those that are good at math and those that aren't.

And although it is amusing, it can also be an invitation to explore. While on the surface many things look like there are only two oposing sides, in reality there is a third, a neutral or more balanced "side" also.

I only followed the Second Chance issue, a drug rehabilitation center for inmates, from afar.

Apparently, Scientology critics have been blasting the center because "Some of its training manuals are based on research by L. Ron Hubbard" - irrespective of whether the program is effective or not.

It seems the center will now have to close because it built a sauna within its premises, for which it did not have a permit, and also for housing inmates from other counties who may not have been eligible for the rehabilitation program. Abruptly shuttling people from the facility on Christmas Eve, caught on camera by police officers watching the facility after they had been tipped off, did not help.

This being said, Carlsbad Magistrate Judge Henry Castaneda who assigned inmate to the center finds it a pity that the center would have to close, because, as he reports, the results have been very positive:

"They have been successful on coming out. They have learned from the program. I see them on the street and they look healthy," he added. [...]

Castaneda reported at that time that he has sentenced 11 individuals to the Second Chance Center since late last year. He said seven have completed the program and five were currently in the residential drug rehab program that takes six months to complete.

Castaneda said the individuals he has sent to the program through the court's alternative sentencing program had been habitual drug offenders. Since their completion of the program, he noted, he sees them on the street but has not seen them back in court.

"They are holding down jobs and they look healthy," he said Monday.

Albuquerque Mayor Martin Chaves, himself, though he terminated the city's lease with Second Chance (who has until Jan. 31 to vacate the facility), qualifies the abrupt termination of the center as "an unfortunate end to what could have been an alternative drug treatment center".
No comments: Links to this post

Anonymous' Video on Washington Post's Most Viral of 2008

Way back in January, before he made nice with Matt Lauer, Tom Cruise was still Creepy Tom -- a state of being exemplified nowhere better than this leaked Scientology promo video. Cruise rambles, he cackles, he avoids proper nouns and he proclaims himself an "the only one who can really help" at car accident scenes.

It was classic unhinged celebrity voyeurism, but the story got really interesting when a group calling itself "Anonymous" posted a response video, in which it vowed to bring down the Church of Scientology. The two minutes of eerie digital voice-over eventually led to real-life protests in more than 100 cities.

Somebody Pass Me the Oxygen Mask

I have read quite a few good articles related to Germany's positive reception of Valkyrie, but OtownRog's stunning entry in the OrlandoSentinel blog is worth being quoted in full:

Germany, which had gone into hysterics when word of the film first broke, has gotten around to seeing Tom Cruise's portrayal of national hero Claus von Stauffenberg in Valkyrie. And the German critics have warmed to the picture, which ennobles the men who finally got around to taking their shot at killing Adolph in the days just after D-Day.

I found it serious, smart, a real straight no chaser thriller. The nasty buzz on it, predictions of "Razzie" nominations based on a seething hatred of all things Cruise, seems on firmer footing with those who haven't actually seen the film.

Fox News' Roger Friedman's nasty dust-up with getting banned from seeing the film in a preview has led to him calling it a "Nazi apologia." Well, somebody pass me the oxygen mask. I love it when anybody working for Seig Heil on your dial uses "Nazi" in a sentence-- be he Bill O'Reilly or Roger Friedman.

In any event, reviews on the movie are mixed to positive, over all. And I found a few Cruise-crushing sites spinning the German reaction to the film as "negative." I'm not sure if "lightning rod for criticism" translates into box office for anybody other than Michael Moore.

Fox News Roger Friedman - Not a Man at Peace

I was wondering why Fox News commentator and film critic Roger Friedman would slam Valkyrie with such absurd arguments as he threw in an article entitled "Is Horrible 'Valkyrie' Tom Cruise's Nazi Apologia?", at odd and against the overall positive reception of the film.

Things are a bit clearer now.

Indeed, I have seen titles in the past about a journalist being "banned" from Valkyrie's premiere (actually just not invited), but I did not pay attention to who it was. Now I learn that it was none other than ... Roger Friedman himself!

Check out this review, in which he complains about being banned but goes ahead assessing the film nevertheless.

Roger has in the past delighted at slamming Cruise and Scientology, and that may have been the reason he was not considered objective enough to be invited at the premiere.

Now I don't support banning anybody from anything, but is taking a petty revenge slamming the film with absurd arguments something a dignified reporter should engage into?

Friedman should heed Cruise's example, who, in spite of ugly discrimination Germany has been throwing at Scientology, has nevertheless made a film putting them (and no, NOT Nazis) in a good light.
1 comment: Links to this post 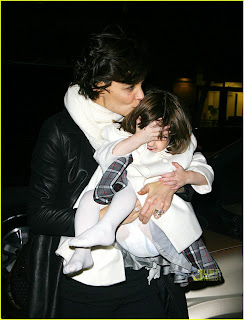 There was a French clip quite a few years ago entitled "C'est dur dur d'etre bebe" (It's Hard Being a Baby) which was an utter hit and was utter cute.

Now how about being a celebrity baby? Tom said he does not mind Paparazzi but all the flashes must take a toll on baby's eyes...
No comments: Links to this post 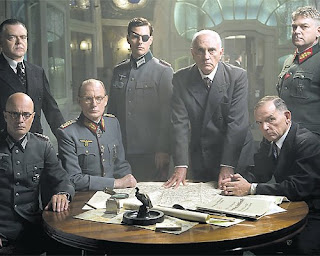 This title does not come from me but from German director Florian Henckel von Donnersmarck, whose "The Lives of Others" won a foreign language film Oscar!

Would you believe it?

Indeed, ahead of its release in Germany, media commentators, so keen at other time to burst a flame against Scientology, have praised Bryan Singer's film.

Such prominent media outlets as public broadcaster ZDF and the Frankfurter Allgemeine Zeitung have given it a serious thumb up.

The ZDF was heard saying it was a "well-made and serious film" and Cruise's part "a solid performance".

Koelner Stadt Anzeiger added: "[The fear that] the myth of the German resistance would be put through a Hollywood filter has turned out to be wrong and prejudicial. On the contrary, the American origin of this film is its biggest advantage."

To be fair, not all reviews were uniformly positive. Such is the case, for example, of the Badische Zeitung, who wrote: "The film is well-crafted, no explosive, loud war drama but a calm, chronological tale ... the main weakness is Cruise himself, who appears in almost every scene but is stiff".

This trend among German film critics was already visible back on Dec 12., in spite of claims by the gossip tabloid Daily Mail (whose unsubstantiated rumor about Cruise "living in fear" is still being echoed by many fact checking deficient news outlets) that "the movie was given a roasting by German critics".

In fact, not only did Cruise win an incredibly risky bet making that film, but he seems to have achieved something exceptional in Germany, totally at odd with what the Church of Scientology would do out of revenge for being considered by Germany a money-grabbing cult rather than a religion. This is worth to be commented on in future blog entries.

Now is the film a "Nazi apologia", as Fox News' Roger Friedman wrote and as Barbara Schwarz claims? Does it seek to depict a "good Nazi"? No way, quite on the contrary it seeks to show that not all Germans were Nazi-alike, and this is why German media are so supportive.

Hopefully they will also realize that, in the same way, not all Scientologists are as depicted by fanatical anti-Scientologists, and ease off on their disgraceful discrimination.
No comments: Links to this post