Rave - The Day Scientology broke 20,000: "As they say in Hollywood, any publicity is good publicity. The Church’s exposure has been enhanced by websites who are dedicated to exposing the organization, and newpapers running articles in series about the Church. This has helped produce a public awareness of the Church and the existence of its philosophy. While the recent advertising campaign doesn’t mention critic’s efforts, it builds on earlier exposure."


Indeed, go to http://www.alexa.com/siteinfo/scientology.org. There you will see the stats, and can compare them to xenu.net.

This is a comparison over a month: 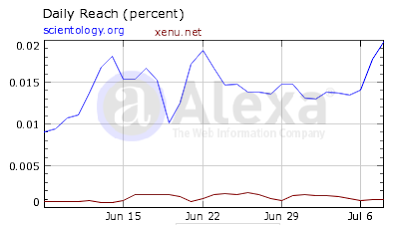 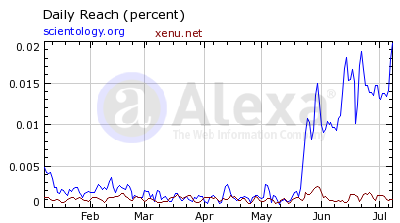 This is the effect of the new advertising campaign ran by the CoS, combined with the hard work by dedicated Scientology critics who helped make the name of Scientology familiar to the public while at the same time discrediting themselves by their own ridiculous accusations.

This is the graph over the maximum period: 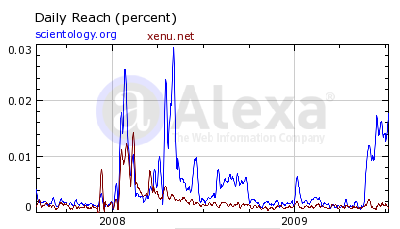 We can see here the effect of the work accomplished by Anonymous in February 2008. However, after Anonymous wasted their potential and became irrelevant by failing to moved beyond the level of the "old guard", Scientology's stats were down and they had to find new ways to advertise themselves, which they found and which seems to be working incredibly well.

As I said so many times, "criticizing" Scientology through outlandish accusations is only going to accomplish two things: discredit yourself and raise interest for what you are unfairly attacking.

In this way, critics are truly a great ally for Scientology and the CoS should thank them.
11 comments: Links to this post