Give Me Back the Original Alyssa 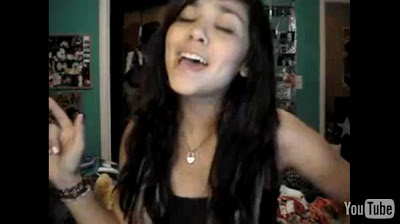 I have no idea what's going on in the mind of this girl, Alyssa Bernal.

Last February, I featured a superb video of her. She now made that video private and instead replaced it with an acoustic version that is not even half as good as the original one. Luckily some people have copies of the initial video and repost it on YT. Why she makes her best video privates when it had millions of view I can't imagine!

She's kind of becoming a celebrity already and has been featured in the Grammys for her (good but not that good) "I Kissed a Girl" and it seems she has now a parody video of it.

Give me back the original Alyssa! For some people success is not good as it make them lose that divine spark of spontaneity that is unique by itself.

May 12 update : I just learned that the reason she pulled the video off was because of copyright, as the original of that song was playing in the background. That's silly because you could hardly hear the original and the focus was wholly on her singing. That would be a perfect example of fair use.
No comments: Links to this post