There are currently a couple of lengthy threads about me and my web sites on ARS, fostered by my recent open letter to Andreas Heldal-Lund on OCMB asking him to activate my months-old account registration request so I could have my say on Don Carlo's threads about my websites.

In OCMB and on ARS people have made a few speculations as to who I really am. Some people thought that I was from Germany and others that my native language was Dutch

I post pseudonymously, for a variety of reasons, and did so as I started posting as an outright Scientology critic on ARS back in 1996.

There are, however, a few things that I let know about me over the years:

I am from Belgium and my native language is French.

I believe my command of Shakespeare's language is more than fair, but here and there, there may be some idioms or subtlety I may miss.

The latest example of this is my recent blog entry where I claimed that "What is Scientology Queries Tops Google search in 2008". In my mind this meant “among the top”, but, upon a remark in that ARS thread, I looked it up, and now realize that it really means “at the topmost”. I adapted the post title to reflect this.

If you have any more such comments or doubts or whatever, my comments section is open and I suggest you post them there or sent me email before setting off in wild accusation campaigns based on nothing more than a possible misunderstanding.

Though moderated, the comments section is open to every viewpoints, except for spam, off-topic posts, copyright violation, and invasion of privacy. Apart from this, I always post all comments, no matter how insulting, false or misguided (keep in mind, though, that this is a comment section only, not a public forum aimed at extensive debates). I also believe that aggressive comments tell more about those making them than it does about the target of their vindication.

For the rest, what I also made known, was that I was on local staff from 1975 to 1978, during which I went for a lengthy stage at the European HQ in Denmark, then started working for the SoCo bureau at GO WW where I stayed for an other half year before leaving the movement altogether in 1980. My Scientology stories are recounted here, here, and in more details here.

After I quit Scientology, I never had anything to do with it, and didn’t even join any Freezone groups as I simply stopped believing in the tech when it came to spiritual results, my one and prime interest.

I basically “fell” back on my previous spiritual path, that of Theosophy and Krishnamurti, and extended it with things like Alice Bailey (about whom I had a web page until representatives of that movement sent me copyright notice to put what I webbed down, and ignored my request to keep part of it as fair use). Nowadays I am a fan of Eckhart Tolle, which was tipped to me by a Scientology ex-member who was greatly helped by my web site.

After I left Scientology I was fascinated by the anti-cult movement and traveled quite extensively in the USA to personally understand what it was all about, and even had an extensive interview with the dreaded Ted Patrick as he was commuting between San Diego and Los Angeles (where he had to attend one of his numerous suits). My spiritual background, my Scientology experience, and my anti-cult-related researches are part of the reasons my web site and blog reflect a host of what I refer to as “alternative” viewpoints.

It’s funny to read from the ARS thread above (I do read ARS currently but try to avoid starting to post to it for now), that Piltdown Man thought my native language was German. I am not sure why he would think that. I do have a certain understanding of German but when it comes to speak that language, I am rather clumsy.

Piltdown Man is currently one of my favorite posters, even though we probably disagree on more issues than one. I appreciate his witty style and insights, but I have no idea who he could be, even though we both are from the same tiny country.

Most of my friends who were in the org at the same time as myself are now ex-members too (partly because of my own dissent), and all of them unanimously share my moderate viewpoint on Scientology (which leads me to believe from that sample and emails I receive that this is a very common situation when it comes to ex-members). I have heard through some of my friends that they know of someone in Belgium who is more radical or engaged than the lot of us but I really don’t know who it could be. Probably just as well.
4 comments: Links to this post

I reported about Fox News commenting on the freshly made reviews of Valkyrie but still wonder where these are. Nothing comes up as of now on Metacritics, while only four reviews (with a 2-2 split so far) are to be found on Rotten Tomatoes, while IMDB features a very positive comment.

For his part, Alex Billington from FirstShowing.net loved the movie and gave it a wooping 9/10:

A film that I optimistically went into and walked out loving. It may not be exactly be flawless, but it's already high up on the list of my favorite WWII films, and that's admittedly a very hard list to get on to. The cast may be the weakest link in the end, but Valkyrie literally had my heart racing from start to finish, even though I already knew what that outcome would be. 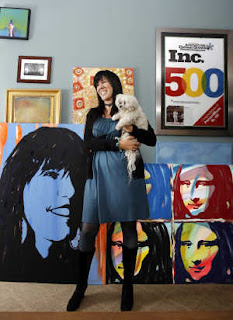 PostcardMania, a direct-mail company that prints and ships postcard advertisements on behalf of businesses nationwide, is 10 years old with 160 employees and 31,000 customers. [...] A few years ago, PostcardMania cracked Inc.'s 500-fastest-growing list. In 2007, it still made the Inc. 5000 (No. 3,130) as sales more than doubled.

Reading through the article you can see traces of quite a few Scientology techniques for business being applied:

She's fighting the thought of layoffs. Reluctantly, she trimmed the annual Christmas party budget from $30,000 to $15,000. It won't be at the Don CeSar like last year, but the party will go on. "No way we can cancel it. Our staff worked too hard," she said. "We need it this year." [...]

Helms said there has been no scrimping on salaries, with positions in various fields paying 20 percent above industry averages. [...]

Make sure your core workers are on the bandwagon to beat the slump. Get the eternal slackers slacking somewhere else.

'Gendusa has flipped her marketing machine into overdrive. In mailing 120,000 self-promoting postcards to businesses every week, PostcardMania is its own biggest customer.

"You have to be even more aggressive on PR … on buying ads," suggests business consultant David Gerwitz, author of The Flexible Enterprise. "Many of the businesses that succeed during a downturn are ones that put money into marketing as opposed to pulling out." [...]

Gendusa became a marketing devotee during PostcardMania's early days. Orders were coming in, but for months the company was stuck at $20,000 a month in sales. Gendusa doubled mailings of marketing material and soon after sales doubled.

Be picky in taking on debt. As a rule, the company saves to have enough cash on hand before buying new furniture or adding amenities. The exception: taking out a $2.4-million industrial revenue bond for a printing plant and equipment that was later repackaged into a $5-million construction loan to finance new headquarters.

Keep morale up. Every week, employees gather to share kudos about fellow co-workers, with one compliment sparking another. No negative comments and no gossiping allowed.

Interview part 2 - with Jay Leno's funny Christmas song about killing Hitler... putting the finger on what may be a weak timing for the film opening, on Christmas day...

But first check this Cruise impersonation of Elvis as a teaser... Nice piece of work, coming after his Golden Globe nomination for his hilarious acting and dancing in Tropic Thunder (nomination about which even Brooke Shields is thrilled).
No comments: Links to this post