I remember, back when I was last reading ARS a few years ago, a guy whose paintings I really liked (some of which can be seen here) and who made grandiose, sometimes ridiculous, claims against Scientology - such as Scientology attempted to deprogram him and that Clinton was part of a Scientology conspiracy.

I did not follow what happened since then but now I read that he lost his cases, hardly surprising as they always looked to me as frivolous and silly as the Letterese and Elliott ones.

I could not find a Wikipedia page on Pattinson, which is an indication that critics have nothing to brag about. So here are two opposing view pages. The story of Pattinson hosted on Lerma's site, (for critics' side) and that of the RFW (for the CoS' side). Make up your own mind.

As for me, I really would like to know where I can find more of his paintings.
No comments:

A poster in ARS claims that the Church of Scientology agrees to return the PC Folder of people who received auditing at their quarters. However, in spite of him writing "It's Official", he only provides a link to some podcastradio MP3.

We'll have to wait for more credible confirmation before reporting it as a trustworthy news.
No comments:

Phil Scott reports a sheer drop in traffic of alt.clearing.scientology, a newsgroup that once was thriving with Freezoners posts.

I am not sure about the other claims Phil is making in the same post (and one has to take them with reserve), but at least that particular one is easy to verify.

I am not familiar enough with the Freezone to know if the discussions have been carried to another forum, or if there is now a complete disinterest to pursue Scientology tech outside from the Church of Scientology.
2 comments:

In his book, "The Complex", John Duignan acknowledges the effect Anonymous protests had in his defection from Scientology:

Scientology was firmly on the world agenda and as my confidence grew, an organisation called Anonymous emerged. [...]

Their mere existence has empowered me, and many others, to be even more vocal in exposing this abusive cult. They have given me huge strength and a new-found belief in the human race. The humanity and the sense of empathy I have gotten from these strangers, or as the Church of Scientology has described them 'cyber-terrorists', has been just gut wrenching for me. Each and every one of them who have contacted me, have expressed their disgust and shock at the conditions endured by staff and Sea Org members.

When I realised what the movement are doing and how powerful a force Anonymous have become I actually broke down and cried. They are taking a stand for me and for Scientology's victims like Alice* and Lisa McPherson, and for the countless others whose stories have not been told but whose lives have been destroyed by this evil cult

John also also falls for a few Anonymous myths, i.e. that they have become a powerful force, that the press is still interested in them, that they are human right activists, etc. But I cut out these myths from the above and won't comment further. For once Anonymous has some achievement they can brag about, let them have their field day!
No comments:

Barbz Gets a Letter

I previously made reference to the ongoing debate at the Riverside County regarding a proposed anti-picketing ordinance.

Barbz published in ARS a letter from Supervisor Stone's sister in reply to the letter she sent:

The "hatemonger" comment was directed to a group called ANONYMOUS, a very hateful group of people that wear masks and caps similar in message to the KU KLUX KLAN. Supervisor Stone made this clear at the Board meting with a display of their inappropriate materials they proliferate. [...]

To summarize, the "hatemonger" comment was intended for the group calling itself "anonymous." If you belong to that group then he did in fact mean to include you.

Barbz must also have made some claim about the anti-Scientology myths of people being forcefully detained at Gold, as Stone's sister included in her reply:

If anyone is coerced and held against their will at this or any religious compound, he would not condone such activity and encourage complaints be made to the Sheriffs department or District Attorney's office OR the grand jury if the identities of those making the complaints) want to remain identityless.

Bomb Threats Against the Church of Scientology

Bomb threats against the Church of Scientology, claiming to be detonated "on New Years Day at 12:01am GMT", are being made in the comments section of the anti-Anonymous blog of the pseudo Tom Newton, as reported on http://anonymous-is-a-hategroup.blogspot.com/2008/12/bombs-are-plantedthe-cult-dies-on-new.html

PS - Cut your volume as you visit this page because its author has the disgracious habit of automatically sounding off loud videos or other audio attacks as you open the page.
No comments:

Monica has published a short C.V. on the Nurel List.

As is obvious through Monica's recent stance in ARS and OCMB, she no longer shares some of the myths common in the anti-Scientology milieu. The level of verbal abuses and personal attacks she encounters in these forums now almost reach the level of attacks that were levied at Diane Richardson and myself for years. That's always a sure sign that what she is saying has more impact than what anti-Scientologists can deal with and so have to resort to try and shoot the messenger instead.

Though slanted in the anti-cult direction ten years ago, Monica was always, IMO, a gentle and thoughtful character. See for example her 1996 debate with Diane Richardson on the mind-control issue, then compare this to the more typical sort of "reply" anti-Scientologists engage into in the 1997 second Diane Richardson mind-control thread which I also webbed.

Anyway, in addition to this interesting C.V., the points I would like to make here are two: 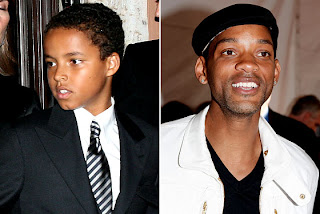 The film itself is a mystery:

Smith said in an interview on the film: “People can’t know about it so we have to talk in code because we can’t say.” Apparently at the center of the mystery is a jellyfish, and that’s all Smith will reveal.

Update Dec 20: a kind commentator pointed out that the guy in the article photo, which I used, was not Connor Cruise - and he is right! Check out the real Connor Cruise here! Man, was that article I linked to wrong! Of course that explains why the guy on the photo does not look 13, as I commented. I now replaced the photo with one of the real Connor Cruise, and (hopefully ;-)) the real Will Smith. What is more, Connor Cruise is actually black! (He is an adopted son.) So no need for all the "they can edit anything to look like anything" BS! I now have taken that out from my blog entry.
2 comments:

If they really took courses, the CoS would probably count them in their "8 millions" members, since it seems they count anybody who once did a course in such an improbable statistic, but the question really is whether JLO and Mark Anthony are now ex-Scientologists (having dabled in for a while then stopped), or still closet Scientologists, or if they are somewhere in between.

The fact that Leah Remini, a celebrity Scientologist, is one of JLO best friends, and Tom Cruise a close friend of Mark Anthony, is of course not enough on its own to make of them Scientologists.
No comments:

Rwandan Convicton - Too Little Too Late

A United Nations-backed court in Tanzania on Thursday convicted one of the masterminds of the Rwandan genocide, Theoneste Bagasora, a former Rwandan Army colonel.

That conviction seems pretty obvious (and one wonders why it took them 14 years to come to that conclusion!), but the reason I do not tag the title as "off topic" is because I wonder whether those who banned pro-Tutsis radio under the pretense of ""harmful radio propaganda", then set their own hate broadcast station (the unfamous "Radio Télévision Libre des Mille Collines" (RTLM), largely considered as instrumental in justifying and motivating the killing), should not be likewise tried.

Hate speech is best opposed by free speech and the solution is not to try and thwart hate speech but to allow on the contrary more free speech, and I think the present example is a dramatic and tragic example of what happens when you only allow one view to be expressed, and ban the few counter-views that could at least help to balance them somewhat.

It is remarkable to note, as mentioned on that Wikipedia entry too, that it was precisely these youth-aged Rwandans, motivated and entranced by the the RTLM hate propaganda, that made up the bulk of the Interahamwe militia.

In such a context, the conviction of Bagasora, though of course fully justified, seems to me to only scratch the real cause of the genocide. I believe that the United Nations-backed court should take a much deeper look into what really made such a horrendous event possible.
No comments: