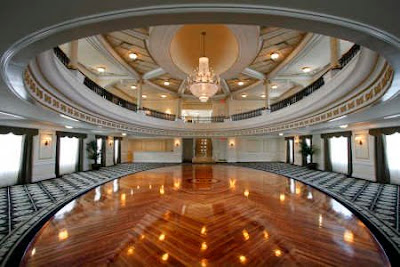 On Feb. 18, 2009, I reported the ongoing renovation work at the Fort Harrison luxury hotel in Clearwater.

Saturday night, the Church of Scientology held a reception, attended by many local bigwigs, to celebrate its reopening.

The CoS says that now that this huge project is completed, they will focus on finishing the "Super Power" building for which they are being fined $250 a day for not bringing it up to code.

The Church of Scientology is reopening its lavishly renovated Fort Harrison Hotel [...]

Now attention turns to Scientology's enormous building across the street that has sat vacant and unfinished for six years, mystifying the public.

The Flag Building, nicknamed the "Super Power" building, is a seven-story, 380,000-square-foot empty shell that encompasses a whole city block. The church gets fined $250 a day for not bringing it up to code, and the fines now total $245,000.

Numerous promises to finish the building have come and gone, but church officials insist that this time it really is next on their to-do list. [...]

Built in 1927 as Clearwater's first skyscraper, the hotel was a local focal point for decades. [...]

The church has gained greater acceptance over the last 15 years or so, to the point where many local bigwigs felt comfortable attending a reception at the hotel Saturday night. [...]

Now the redesigned lobby opens up to the third floor, where a pedestrian bridge crosses Fort Harrison Avenue to the unfinished Flag Building. [...]

The hotel has three restaurants — none of which will be open to the public, despite what the church previously said. The ballroom won't be rented out for weddings either. [...]

"We look forward to them getting it complete," said Mayor Frank Hibbard.

In 2006, Clearwater started fining Scientology $250 a day for failing to bring its building up to code. When it's finally finished, the city's code enforcement board will review the fines and decide whether to forgive any.[...]

Scientology's explanation for the unfinished building: It repeatedly redesigned the interior, and it embarked on an international building spree. Recently in Clearwater, it has chosen to work on the Oak Cove and Fort Harrison hotels instead. [...]

The building is nicknamed "Super Power" because it will be the only place in the world where a highly classified Scientology program called Super Power will be offered. Its upper floors will house special equipment that church officials say is designed to heighten one's perceptions. [...]

The Fort Harrison Hotel's renovation will increase Scientology's property tax bill. Two-thirds of the church's property in Clearwater is tax-exempt because it's used for religious purposes, but Scientology's hotels and restaurants are taxed. Last year Scientology was charged nearly $800,000 in taxes on nearly $108 million worth of Pinellas County property. [...]'

Nashville New Building to Be Ready before Summer

On June 29, 2008, I reported on the Church of Scientology Religious Trust having bought the Fall School Business Center on 8th Avenue in Nashville, with the comment from the reporter that "Haynes says it was very important that the historic building be well preserved by its new owners, and looking at other historic buildings purchased by the Church of Scientology around the country, he was convinced there buildings character would remain intact."

On Feb. 17, 2009 I reported about Shallownimous spending their Valentine day in inept protests about the opening of this new location, with the comment from the reporter that "Whatever the Scientologists are up to in there, at least they aren’t the ones standing on street corners, wearing creepy masks and offering cake to strangers."

The article below points to the fact that renovations are under way and opening is expected before summer. However, it also says it will be a "celebrity centre" and not an "ideal org" pointing to the possibility that the CoS may retain it's current building even after the renovation are completed.

The article also mentions criticism from one Todd Lake, who works for a Christian university, and the response by the CoS' representative.

"The Church of Scientology is expanding in Nashville, opening what the religion calls a "celebrity centre" at the historic Fall School Business Center on 8th Avenue South and Chestnut Street.

Renovations are under way at the 36,000 square-foot building, with an opening expected before summer" [...]

""It's not worse because it's Scientology, or better because it's Christian," she said. "Who is to say who is better or who's not? The point with the money is what is being done with it. We reinvest in our community."" [...]

Related blog entries: -NashvilleOrg-
No comments: Links to this post

This is my answer to an interview I received by email:

-What drew you to Scientology in the first place?
The fact that they offered a "technique" that seemed to answer my spiritual quest.

-What was it about Scientology that eventually made you decide to leave?

The fact that the "technique" did not seem to work, at least not at the spiritual level, and the realization of the conditioning and cultic aspects of Scientology

-What are the good things about Scientology?

It offers a seemingly coherent and comprehensive system that is not based on belief but on "principles" that are supposed to work. At the lower level, Scientology can be very effective and offer a way of life by which people can find meaning. See the many celebrities who swear by Scientology. (These just are the more visible members, but many others non-celebrity members share the same enthusiasm.) Here are just some of the later instances I blogged about:

-What are the things about Scientology that people should have genuine concerns about?

The constant pressure to "produce" more or "study" more. The fact that Scientology can't deliver what it promises at higher level. Its cultic aspect. The dependency people can develop towards Scientology. The expensive prices.

-Did you ever come across any openly gay Scientologists in your time as a member?

-Did you ever encounter other Scientologists expressing homophobic opinions or acting in a homophobic manner?


-Do you think claims by a number of individuals that Church staff told them Scientology practices could change them from being gay to straight are true?

-If so, do you think these are indicative of a commonly held belief that Scientology has the power to do such a thing, or that these instances simply reflect the personal views of the particular Scientologists they were interacting with?

A commonly held belief that Scientology has the power to do such a thing. However, homosexuality is not a "hot" topic in Scientology like it is, for example, with fundamentalists. Most Scientologists will consider this a matter of individual choice.

-What do you think of the more extreme claims made by the anonymous movement and what are your concerns and criticisms of the group?

These more extreme claims are childish and for the most part untrue. My main criticism with the anonymous movement is that they failed to bring the critical movement to the "next level" and, instead, just became the "old guard" themselves.

-What do you think of claims that the Church uses underhanded methods to silence and destroy its critics?

It reflects the cultish aspect of the Church. However, I believe it mostly is a thing of the past.

-Do you think the Church's responses to criticism has been constructive in general and what might be a better approach?

The Church's responses to criticism has not always been constructive but I found they have behaved of late. In particular they behaved with dignity for the most part in the face of sometimes vicious attacks from members of anonymous. In some cases Anonymous have had to distort Scientologists response to provocation beyond belief to try and make them look like the bad guys.

I blogged an example (especially relevant here since it is gay-related) of both civilized behavior on the part of Scientologists in the face of provocation and gross distortion from Anonymous to try and make them look like the bad guys at http://anotherlookatscientology2.blogspot.com/2008/07/another-example-of-gross-propaganda-on.html

-Do you think those in leadership roles in the Church are, in general, sincerely motivated?

Definitely. Just look at the latest (extremely) high-ranking defector Marty Rathbun. The guy still believes in Scientology even though he is now out of the Church. I blogged about him at http://anotherlookatscientology2.blogspot.com/2009/02/marty-rathbun.html and http://anotherlookatscientology2.blogspot.com/2009/02/marty-rathbun-sees-through-web.html 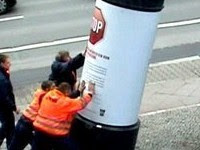 On Jan 24, 2009 I blogged about the anti-Scientology posters in front of the CoS in Berlin: "Another act of discrimination towards Scientology by the German authorities. Government agencies have no business using public resources to take side in controversies regarding matters of personal beliefs."

I am pleased to see that this was exactly the opinion of the Administrative Court of Berlin who declared that the district of Berlin violated their duty of neutrality. The Court ordered the immediate removal of the posters.

I personally think there also should be administrative penalties towards those responsible for this obvious act of discrimination.


Related posts: -Berlin_Posters-
No comments: Links to this post

I am currently applying for a new job and at the same time moving house and country, so you can imagine I am very busy and unable to update this blog or even follow the news. I will resume this blog on a daily basis as soon as my situation gets stabilized again. Thanks.
No comments: Links to this post