Nancy Cartwright Readying $1 Million for the CoS 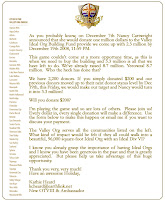 The Cos gets ready to buy yet another building, and Nancy Cartwright is ready to give $1 million in the process. With 2,200 donors already and $8.7 raised so far, Scientologists surely out-do in a single area the whole money raising effort of Anonymous across the world. Not only Anonymous did not manage to close a single org or mission, as they once were hopeful to when they enthusiastically thought they at last managed to do so, but now even new missions are opening. Anonymous can't manage to get much in the press those days, but they can still manage to parasite high profile Scientologists for photo opportunities when they get in the news. It is the case in this U.K. article about the New York premiere of Valkyrie.

While the content of this article is totally negative and biased against Cruise (sounding more like a rag than a reputable media, even affirming the existence of a secret tunnel which even critics say did not exist), it does include quite a few interesting photos.
No comments:

Musing on Bernie and Other "Stooges"

Even though I am not posting to ARS I get my daily dose of "criticism" from so-called critics in ARS, just for maintaining this blog and expressing views that are not approved by the ARSCC committee. Critics who happen to have similar views as mine, or who dare say that Bernie may not be a complete evil moron after all, get to be tagged likewise.

Even Ted Mayett, who is far from being a "cult apologist" as he almost solo picketed the CoS for years long before Anonymous got its pampers changed, is now assimilated to one for the mere crime of expressing doubts about Anonymous.

Here is a poetic excerpt from this piece of high level "criticism" on the part of so-called critics:

As an apologist, he's comparable with J. Gordon Melton, the "scholar" who is periodically paid to suck David Miscavige's cock and studiously put a stamp of approval on the RPF gulags or commit other gross insults to modern civilization.

Pretty soon they'll have their own "SP List", reminiscent of the one that was once maintained on the now defunct Anonymous forum "enturbulation.org", and of course just like the one of the CoS.

But of course "we are not cultists, they are" - right?
1 comment:

http://groups.yahoo.com/group/NRM_Scholars/ is a new Yahoo Group whose aim is to be an "alternative Spirituality and Religion email group for researchers with interests in alternative spirituality and religion, broadly conceived". It is not a discussion forum, although queries seem to be allowed.

Unfortunately, it does not seem to have feed. That makes it harder to follow. I'll try to make the suggestion.

Update: The posts do not seem to be available through the page either, apart for a statistic on the number of existing messages. Apparently, the messages are circulated by e-mail, not posted. Only files and documents and other information seem to get posted.
No comments:

It just occurred to me, as I was blogging about Tom Cruise's Les Grossman character, that one of the reasons he is quite good on this role, on top of him being a natural-born actor, is that it almost perfectly illustrates the "Tone 40" concept of Scientology, at least in the way it is (mis)applied. I wrote a whole page about it in the past, entitled: "The Total Causation Philosophy of Scientology".

What is more, I have known some high-level executives in Scientology that were quite like the Grossman character. The concepts I develop in the page above, lend themselves quite well to this kind of verbal abuses, and I believe that some people for whom it already is a natural tendency, must feel rather comfortable with these.

From what I read, L. Ron Hubbard himself may not have been that far off this kind of behavior.

David Miscavige too. Having had all the time to exactly mimic LRH because he was one of his personal messengers (who have to repeat exactly the same words with the exact same tone), Miscavige seems to have learned well from his mentor in this respect as well...

This being said, I remember some Scientologists arguing about the fact that the real "Tone 40" is supposed to be the exact contrary than what is being portrayed. While at the beginning it is true you shout on the astray with all your lungs, the drill ends up without a word uttered - the real aim of the drill being to get that same level of intense intended intention but without actually shouting anything, even while just speaking normally...

It is singular indeed that Margery Wakefield in the link above completely omits the later, and truer, part of the drill, that consist of giving the same comment totally silently, with intention alone. It also further illustrates how critics can twist the real Scientology (either by ignorance, stupidity, or intent), then proceed to "criticize" Scientology based on such a misunderstanding, echoed later by an army of critics repeating this kind of "criticism" all over the Internet and beyond.

Later on, this is even better illustrated as she writes about giving a person such a command while shouting, whereas the real drill of that one is precisely not to shout at all, but give the commands, albeit verbally, with total intention.

She may not be the only one to misunderstand that concept, though, and I believe many Scientologists do too, as I mentioned in the beginning of this entry. For a while, I myself fell for it, as my memory of the drill after all these years was mostly the screaming part, until I read the reminder above.

PS - an other illustration of gross misunderstanding of Scientology concept is when I saw a staff member actually hitting her leg again with the same strenght as the initial accident in an attempt to apply the idea of contact assist, where you have to redo several times what you just did in the accident to ease off the mental image and subsequent pain of it. Obviously, you don't have to hit your leg again, you only have to redo the movement without the hit, but she had understood it that way and fanatically applied it even though it must have meant excruciating pain!
No comments:

I just made a blog entry about the Reed Slatkin ponzi being among the largest in history. Bernie Madoff may soon join that chart, but what is the link with Scientology, you may ask. Only a distant one: that Richard Behar, author of the famed Time Magazine article on Scientology, "The Thriving Cult of Greed and Power", may be the one commissioned to write a book on Madoff.

I used to have a regular blog entry with comments from Argus Hamilton but I stopped it because it was really quite off-topic.

Argus, however, has two new Scientology comments, and on top of that they really are funny, as usual:

Tom Cruise's new movie - "Valkyrie," opening Christmas Day - is the true story about the World War II German combat hero who tried to assassinate Adolf Hitler. The actor desperately needs a hit. Scientologists are considered so weird in Hollywood today that they have to play Nazis in order to improve their images and save their movie careers.

Tom Cruise apologized on the "Today Show" for pushing his Scientology beliefs on depression sufferers. He also thanked his parents for all their sacrifices for his success. Three times they sacrificed a chicken and once they sacrificed a goat.

The Shoe Must Go On!

I've read a lot of funny comments about the shoe incident but the one newsday.com in title is one of the most funny that far: the Shoe Must Go On!

Seemingly inspired by the Iraqi man who threw his shoes at President George W. Bush on Sunday, one enraged subway commuter at yesterday's MTA board meeting may have threatened to hurl one of his size 10 1/2 Red Wings at MTA chief Elliot Sander - exclaiming as he reached for his foot, "You made $300,000 last year and this shoe is for you!"

However, the actual follow up of the Iraq shoe story is not funny at all as it appears that the shoe-throwing journalist may have been beaten and now, supposedly, demands pardon. This should remind us that, although funny at the outset, the reason and background of it is deadly serious. 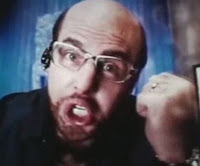 Cruise's role in Tropic Thunder has been almost universally acknowledged as stealing the show from the movie, and has now earned him a Golden Globe nomination. However, up to this day, I still read rave comments about it:

The most enjoyable cameo arrives from none other than Tom Cruise, who shows the world he can still be a blast to watch. Regardless of any Katie Holmes or Scientology shenanigans, Cruise can still dominate a scene, and to sound unprofessional, is “the man” in this flick as Less Grossman.

Les Grossman personae appears to be so popular they even think of doing different videos with the character.
No comments: 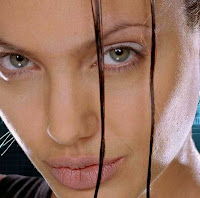 It's interesting to see that in spite of the negative publicity Tom Cruise suffered of late, foxnews still consider him a bigger banking star than Brad Pitt and Angelina Jolie:

Cruise is like the King of the Globes, their most desired participant for TV ratings, bigger even than Brad Pitt and Angelina Jolie.

As for the story itself, I find it natural that Katie Holmes choose to attend her last Broadway performance rather than accompany Tom at the Globe. Some rags, however, seem to make a big deal of that.

I don't quite agree with foxnews on that one. Even without Cruise in a bad light, I think Angelina Jolie is a bigger public attraction, but then, I am not a teenage girl either.
No comments:

Reed Slatkin, co-founder of Earthlink Inc. and once a Scientology minister, was sentenced in 2003 to 14 years in prison for swindling investors out of about $240 million over 15 years. Groups affiliated with the Church of Scientology agreed to return millions received from his scheme.

Note however that on the whole page, the "groups affiliated with the Church of Scientology" are the only ones who agreed to return millions received from Slatkin scam.

I don't have the details in all this story but usually most people in a pyramid scam, even relatively high up, are victims rather than perpetrators. Maybe naive or greedy but victim nevertheless. However, I never heard of anyone agreeing to return money gained in such a scheme once it was discovered to be a scam.

Anonymous Ignored by the LA Times' Year in Review

The LA Times seems to have a year in review page, though I don't seem to be able to access it by itself, apart from the entry mentioning Scientology.

What is remarkable in this entry is that the LA Times completely ignores Anonymous. It mentions that:

The Church quickly went on a campaign to eradicate the videos from YouTube, but succeeded only in outraging many online denizens.

but does not mention Anonymous in name nor does it mention the movement at all. Since I can find no other entries mentioning Scientology for this year in review, I conclude that Anonymous is completely ... anonymous. The whole advent seems to be completely ignored.
1 comment: