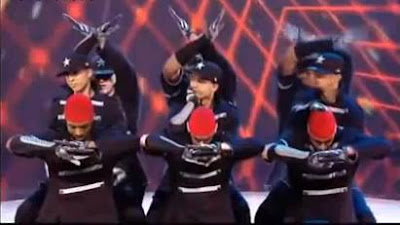 The dance group Diversity put up a stunning performance tonight and well deserved the Britain's Got Talent crown! Fantastic!

Now Susan Boyle... the moment she started singing the very same song that got her famous during the audition I knew that she blew it. It didn't evoke in me anything else but disappointment. Everybody was waiting for a new performance, on a new song, and certainly not on the same very song she so brilliantly performed initially. Even though the final rendition was "better" in a way, it was almost perfect with a lot of nice add ins to it, it will never come up to the quality of the audition version, because it completely lacks the package... Anyway, I also find the audition version better, because though she final version stressed the high notes, the low notes in the audition version were incomparably better.

So, sorry, Susan, but whoever gave you the advise to make a "polished" version of "I Got a Dream" again, should be shot. Or hanged. That was a terrible mistake, and I am almost sure it cost you the title. With the voice you have, you could have given a go at Celine Dion's "Surrender". That would have blown the audience apart - with no chance whatsoever of any competitor to come everywhere near...

Ah, well... In a way, it's better like that. Susan is already famous and on the way, for sure, of a multi-million record to come out soon. I'll certainly be looking forward to that, as that voice really has no equals, especially in the low notes, IMHO. It will also help to lessen a bit the pressure on her shoulder. And then, last but not least, it gives something to a runner up, as Susan had it all already...

Well done Britain's Got Talent - one of the best show, including the final, I have ever witnessed - with a great winner, and a fantastic runner up!
No comments: