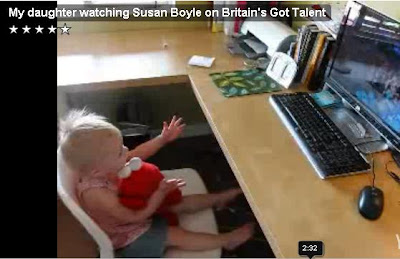 You Tube - My daughter watching Susan Boyle on Britain's Got Talent

This is an amazing video. Here is a 18 months old toddler watching the famous Susan Boyle video. She claps exactly at the right times, and without being probed into that by the public as it is just at the beginning. There's quite a bit of food for thought in there, both for understanding (?) the mind of toddlers, or maybe some toddlers, and the universal appeal of that Boyle event. Quite fascinating, and the look of that child watching the performance... Well, a video that may go a long way on YT.

I got another demonstration of Boyle's appeal today, as I introduced a friend to the original boyle video, and as so many others around the world, she just started crying genuine tears that lasted long after it was over, then she started to re-watched the video endlessly.

Now I also got on YT and searched for other version of "I dreamed a dream", and, frankly, nothing comes even near Susan's rendition. They are all terrible pale in comparison, even though it's interesting to get other views from that piece, and some of them make me better understand the drama of this song and its power. Nevertheless, there's not a single voice that matches the purity and richness of that 48 years old unemployed cat lady from a tiny Scottish village!

The worry now is whether Susan will sustain what goes with absolute stardom. She gave three mind-blowing performances in the Britain's Got Talent tour but had lapses of memory in Sheffield and had to cancel Manchester.

Well, let's cross fingers... and put that thumb in our mouth too!

PS - I just learn that tomorrow the BGT show is in Glasgow... Now that makes a bit more sense. She wouldn't want to mess that one, so better take a rest than risk a miss in her own capital where the expectation and pressure must be formidable! If the public reaction we saw in Birmingham and Sheffield are incredible, what is it going to be in Glasgow! Really I am not sure I would want to be in Susan's shoe for that one!
No comments: Links to this post