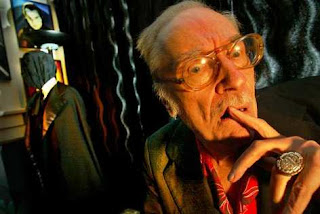 Ackerman was a primary contributor to making science-fiction something that could be defined and understood by the masses, right down to coining the phrase "science-fiction" itself. There is not a single aspect of genre culture that he did not inspire, influence, embrace, embody, popularize, promote or have an actual hand in creating.

As an agent, he represented more than 200 authors in the genre, and was instrumental in the rise of greats such as Isaac Asimov, Charles Beaumont, Marion Zimmer Bradley, Ray Bradbury, Ray Harryhausen, Rod Serling, Edward D. Wood Jr.

Why the news is relevant in this blog is because he also was the literary agent and friend of L. Ron Hubbard, long before Dianetics and Scientology.

As a publisher, his Famous Monsters of Filmland, the garish, gushing, goofy fan magazine he launched in 1958, became an acknowledged inspiration to countless future fantasy creators, from Steven Spielberg to Stephen King to budding auteurs not even born when it ceased publication in 1982.

Ackerman was considered as perhaps the science fiction's greatest collector, owner of a huge private collection of science-fiction movie and literary memorabilia that for years filled every nook and cranny of a hillside mansion overlooking Los Angeles, the "Ackermuseum" – which he gladly kept open to the public.