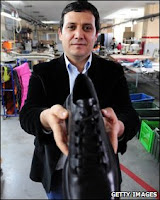 This does not prevents the Turkish firm, Istanbul-based Baydan Shoes, to be mostly recognized as the maker of the shoe, until then called "Model 271", but now renamed "Bush Shoe" or "Bye Bye Bush Shoes".

He is overwhelmed by orders and have had to hire 100 extra staff to face demands, including from the US (18,000 pairs) and Iraq (15,000), while a British distributor has asked to be the firm's exclusive European sales representative.