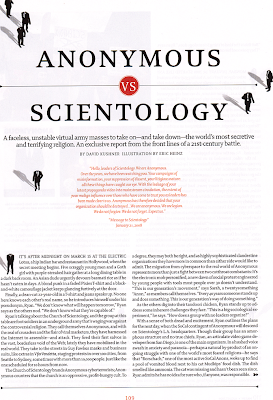 Maxim, one of the most popular men's magazines in the US with a subscriber base of 2.5 million, published a very good article about Anonymous vs. Scientology.

This being said, the content is a bit lacking when it comes to Scientology itself, but it has a very good historical perspective on the development of Anonymous.

Another criticism is that the article is a bit complacent with Anonymous self-aggrandizement proclamations such as:

Sooner or later anons may realize how stupid they have been for uncritically swallowing that much crap from the Internet and may feel a bit ashamed for having been a participant in that "big social experiment".

One last thing, the statement that Anonymous protested "sometimes with more than 10,000 people" is a bit exaggerated. Even by their own inflated statistics, Anonymous never reached 9,000.