A First Look at Jeff Jacobsen's paper on Project Chanology 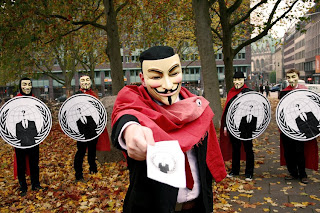 Jeff Jacobsen has an extensive scholarly-style study of "Project Chanology" posted on his web site.

The first impression is very good. The photos chosen are superb (see on the left here), the style is very clear, the ideas structured, and obviously Jeff avails of a lot of information, both publicly available and other more private, gathered from what he refers to as "informants".

I have only scanned through this very long article, so the opinion I am expressing here is a limited and reserved one, which may possibly change if ever I find the time to read the article in more details.

The start of that text looks very good, and seems really informative about Anonymous, its origine, development, impact, etc.

Jeff seems to basically assume that Anonymous is already a success, and this seems to be the reason why he goes on and on and on analyzing a supposedly new and successfull model of social interaction and activism.

This seems to be the weak point of his work. While Anonymous certainly was a success at the start, where it mobilized overnight an incredible number of protesters across the globe, its success seem to me to stop there. It was not successful at bringing major changes within the CoS; after nearly one year, concrete results, as I wrote in another blog entry today, are almost non-existent; the numbers have dramatically crashed down and have remained low; Anonymous is currently almost unanimously ignored by major media, and some authors even start to write about them with some hostility, calling at least some of their protest "lame" and the protesters "inept".

This, major fail dimension, Jeff does not seem to take into account in his essay. Witness the last paragraph summarizing this tl;dr paper, devoid of any reference to that particular, crucial, aspect:

In summary, collective action is easy to form and easy to do when it is Internet based. This makes collective action more likely and potentially more powerful once begun As more and more of these Internet based collective actions succeed in their established goals, such success will breed attempts at imitation. If Project Chanology succeeds in pressuring the Church of Scientology into significantly altering its methods or its strength, more people will look at Anonymous' actions and history for ideas on how to mirror their success. Project Chanology already shows the surprising speed and size that such collective actions can take. Such actions should be expected more and more in the near future, but it will not be possible to predict their creation.

Jeff also, not surprisingly, seems to put on equal foot anons with what other critics already referred to as "human rights activitsts", or "civil rights activists".

There is no doubt in my mind that anons, just like OG critics, are sincerely motivated by the best of intentions, indepedently from the fact that the critical thinking ability of many, ironically, are not quite matching their intent, but to compare them to human or civil rights activists is, IMO, pretentious and inexact.

For one thing, human rights activitists typically defend a minority against an oppresive majority, sometimes at the peril of their life. In the case of critics and anons, we certainly cannot say that this is the case, and more typically they express the sentiment of the majority towards an unpopular minority. A "misguided mob" seems to me to be a more fitting description for critics and anons than "human rights activist", even though I believe critics do make valid points too.

The mob may use a series of factual-sounding and clever justifications, of which the present scholarly-sounding essay may be one, but these are most of the time superficial and usually do not hold water once examined in depth, somethings people obviously do not always have time to do, and thus myths can keep on having a life of their own on the Internet.

Really, although the technology revolution represented by high-speed chips running up and down super fast information highways is fantastic, it does not have only a positive side. That it does, is yet another mis-conception common to critics.

All in all, I believe the article is certainly worth reading for its initial part. Later on, it seems to lose itself in useless abstraction. More importantly, it is not critical enough towards assumptions typical of the anti-Scientology movement. Not surprisingly, being written by a prominent anti-Scientologist.